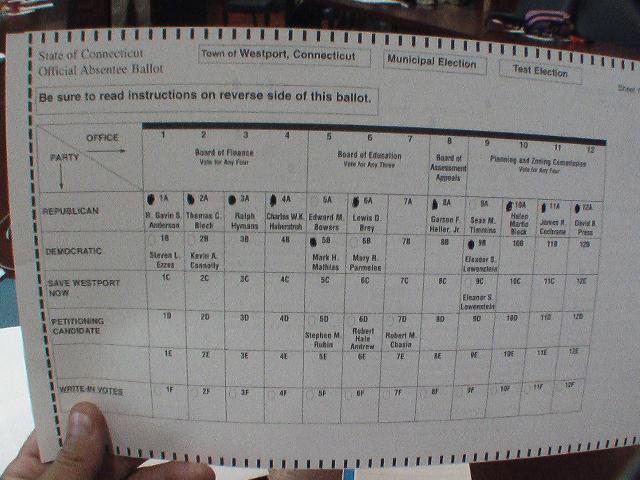 OK, a few corrections need to be made that justifies a new article. Thanks and h/t to Gabe for his feedback over at My Left Nutmeg.

The latest number is Joe Courtney by 109 votes, which reflects the +100 error for Simmons and the +37 error for Courtney.

The procedure going on right now is called a "canvass" rather than a recount. The canvass has to be completed by Wednesday night. From what I understand, the canvassing includes checking the totals reported by each lever-style mechanical machine against the reported totals. This is where the +100 vote Simmons error and +37 vote Courtney errors came from.

The larger numbers were most likely transcribing errors. The other 1 and 2 vote errors may be overlooked provisional ballots, or minor transcribing errors. Many of the towns have reported these kinds of small errors, and they tend to balance out between the candidates. There is no significant sweep going toward either candidate.

The OS machines are canvassed by re-scanning the ballots through the machines and checking the figures reported. In the event of an actual recount, which the loser may request after the canvass is completed should the difference remain this close, each paper ballot will be manually tabulated. I think a recount can be requested any time the margin is withing 1/2 of 1%, but I'll have to check that. It may be as high as 1%.

All of this is separate from the random audit of 25% of the OS machines that Secretary Bysiewicz's office will perform at some point to verify the accuracy of the machine totals themselves; this was planned before the election and has no connection at all to the canvassing or potential recount. I'll try to find out when the audit is scheduled to take place. Obviously, the canvass and possible recount take precedence.

I have some suggestions for voting reform at the end of the last entry's comment thread.

I have a question about the 100 shift. This sounds like its from a mechanical machine. If it is don't they have vote totals on the outside of the machine? If I remember correctly during the count of the machine, its serial number, its locking number, and its vote total are read, then the internals are opened and the distribution of each vote across each race is examined.

Now there are 2 possiblities.

1. If the initial extra 100 votes were in excess of the machine's vote total this should dramatically alter the totals for the race for representative on that machine. We might expect that when you add the initial totals for Courtney, Simmons and other candidates for the House race you would get a total larger than the number of votes on the outside of the machine!! The new smaller total would therefore bring this races totals in line with the number of votes on the machine.

2. If the initial number of vote tally was actually correct and the recent rereading was wrong we would expect the initial total of the race to be exactly or just below the the total on the machine and the new total for the race to be significantly below the machine's total. This would indicate a serious number of missing votes for the House race and should make that machine worthy of more investigation.

Either way I would like to know more about this machine with the faulty dial recording in Lebanon.

Patience, I think the voting officials who did the Lebanon canvass said that it was a transcription error (the machine reported 263 votes, but the person "saw" and wrote down 363) and I'm pretty sure they've verified this as the cause of the miscount.

This type of human error is absolutely expected and the canvassing process takes this into account and usually picks up these mistakes.

I'm currently waiting to hear back from Daniel Tapper, the spokesman from Susan's office. He's going to try to answer a bunch of questions I sent him this morning.

As you can probably guess, they're very busy right now, and the fact that they're taking the time to try to accomodate some dopey blogger's questions says a lot about how helpful they're being. Out of all the state agencies I've dealt with, Sec. Bysiewicz's has been the most open and responsive.

After the recount is done, I'll probably post an article about how all the other state agencies can learn from the Sec. of State's office when it comes to helping with inquiries.

Patience, I replied to your other comment in the previous thread. I think we both covered a lot of ground there!

Thanks for your response on the other thread, an also your excellent follow up today and these past couple days on all things House CT-02!

The 100 vote switch is sounding a little better, however I am still curious. Doesn't the procedure for counting a mechanical machine's votes require 3 people to read the inside dials together, come to an agreement and then announce the results to the election monitor approved witnesses and a table of 3 other election workers who all record the results on separate pieces of paper in parallel. And aren't the records supposed to verify with each other what they have written and then reconfirm with the 3 people reading from the machine before proceeding? This would imply at least 6 people who would have witnessed the "initial" misread election night not counting the representatives from each campaign and other approved witnesses who would have been in the room at the polling station in Lebanon after 8:00pm the night of the election. It would seem that there would be a half dozen witnesses at least to the election night count and probably just as many present at the canvas. It would be nice to chase down the details of this.

That's a lot of detail. You must have done some work in polling places to be that well-informed. Thanks for the details.

I'm going to wait and see what the results are; if a winner is declared and the loser decides to accept the results, it doesn't make a lot of sense to follow it up.

If there IS some major problem, I'd be willing to follow up on this. Let's wait and see.