Our Speaker of the CT House 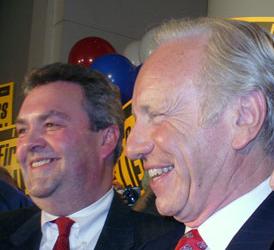 Lest anyone forget, Rep. James Amann (D-118th) is the Speaker of the House for the Democratic Party in the State House of Representatives.

Yet, Speaker Amann turned his back on the party to support independent ("Connecticut For Lieberman" party) candidate Joe Lieberman for Senater, even AFTER Ned Lamont beat him fair and square in the Democratic Primary.

Why do we even HAVE political parties if our representatives aren't going to stand by the will of the voters? What's the point, James? For someone who has enjoyed the benefits of the Democratic party as Jim Amann has, it's a slap in the face to the majority of Democratic voters that he broke with his party to support a turncoat like Joe Lieberman who brazenly ignored the results of a legal, democratic election.

Lieberman took advantage of a legal loophole to get to run for the same office TWICE in one year. You KNOW this guy was an attorney before he became a career politician.

Yeah, Joe won it. Good for him. Sucking up to the Bush/Cheney cabal all these years has served Lieberman well. At the citizen's expense.

Mr. Amann, your betrayal has been noted.

...and just so everyone knows, I was sorely tempted to refer to Amann as:

"Speaker of the Louse"

...but I decided to take the high road.

(...and only mention it HERE in the comments. LOL!)

Bob, can you or Kirby give more info. on when this "speaker of the Louse" is up for re-election and more details as to why he is someone we need to replace. I'm embarrassed to say I don't know anything about him, except the fact that he backed Lieberman, and was determinal to "anonymous'" election, which is bad enough!

Harriet - I'm in Jim's district; he's my state rep. If you haven't see the "Jimmy Soprano" video yet, you should. Gives you an idea of who Jim Amann is.

Plus, he supported Lieberman while serving as DEMOCRATIC SPEAKER for the State House. Can you imagine the shit-storm that would have occurred had any other House Speaker decide NOT to support their party's candidate?

Hey, if he doesn't want to be a Democrat, that's fine with me. But at least do the right thing and resign your PARTY position if you're NOT going to support the party.

And look for more info soon online. People are already hard at work on this one.

Thanks Bob. I do remember that video and it was really disgusting watching his total arrogance and I would love to see someone like him out of office. I’ll check out the other information on-line and it’s nice to know there are people working to take him down.

Here's the deal, anonymous. You do NOT attack other people here. Period.

You are welcome to disagree with their ideas, but if you call people "nuts", you are going to get deleted.

Especially if you do it to a friend of mine. Deal with it, or leave. I don't care which.

If you want total, open democratic discourse, including personal anonymous attacks, feel free to start your OWN blog. Try www.blogger.com; it's a good place to start.

But this is OUR house, and you are expected to be courteous.

Paper says Lieberman did not return Chris Dodd's phone call at all, and did not call Reid back until the next day, ignoring his tuesday night call. Joe thinks he is sitting pretty, but this is a very good article from LastChanceCafe


A word of warning for Joe Lieberman

Who can blame you if you’re feeling your oats right now? You sure showed those Democrats who turned their backs on you a thing or two. So what if you had to snuggle up to Bush and the GOP to get it done? It isn’t like this was your first kiss.

And look at how well you’re positioned now: The Democrats need you for their majority. What better way be to stick the knife into them: You’ll caucus with them alright, but as you said once during the campaign, you’ll vote very independent. You’ll cross the Democrats every chance you get, opposing them on key votes and undercutting their credibility by repeating Republican talking points.

But then, it isn’t like it will be your first time for that either.

But fair warning: The good times won’t roll forever. You see, 2008 is likely to prove a tough year for Republicans in the Senate: Out of a total of 33 races, the GOP will be defending seats in 22 of them, while the Democrats will defend only 11. And while many of these GOP seats are unlikely to be competitive, a number will be, and Republican retirements in response to losing majority status may well expand the field.

All in all, it seems quite likely that the Democrats will increase their majority in 2008. And you know what that will mean, don’t you Joe? That’s right: They won’t need your sorry ass anymore. And I wonder what will happen to your seniority then if you’ve been too big a jerk.

So, again, a word of warning. You may want to consider whether this may not be the time for you to start mending your fences, rather than looking for payback. Because rest assured, those of us who opposed you this time will be watching; and here’s the thing, Joe: We are becoming more influential in the Democratic Party all the time, whether you like it or not. And you don’t even want to think about how long our memories can be

This entry was posted by Steve on Friday, November 10th, 2006 at 12:59 am and is filed under Comment. You can follow any responses to this entry through the RSS 2.0 feed. You can leave a response, or trackback from your own site.

One Response to “A word of warning for Joe Lieberman”
CV Says:
November 10th, 2006 at 2:26 pm
Joe left the Democratic Party this summer, he should have been stripped of his committee seats then. He still should. Watch him switch parties to hand majority back to the Thugs.

we shouldnt have political parties. that way, people will actually have to learn about candidates instead of guessing who the better candidate is by his party.

Bob.. I would hire a food taster and install an auto-start on that car of yours after that blog posting :)

By the way, when Amann was in a fight with the honorable Bill Dyson for Speaker of the House, one of our state reps (who actively supported Ned)laid it out at a Dean Meet-Up: the fight between Dyson and Amann in CT mirrored the larger fight for the soul of the Democratic Party.

You clowns just don't get it...you will force Amann into a primary that he loses...then he will declare himself the next Joe, and will "crush" you in the general as an independent.

Joe has written the textbook on how to ignore the party rules, and every one of the mods you challenge in primaries will "pull a Joe" and win by gaining crossover Indy and repub votes.

Jimmy has the most liberal nutwing of the party as his right hand man in there, Chris Donovan. Shouldn't that make you happy?

I am as pissed as the next guy that Lamont lost and that arrogant Joe will now get a chairmanship...we have to deal with that ass**ipe for the next six years. Amann is insignficant in the mix here...you can sit around planning the coup for two years, or you can get him to do progressive things from his perch that benefit us all. After all, what is your goal?

Why is it that when we don't immediately agree with you that makes us "clowns"?

The very fact you use a term like "nutwing" shows us who you really are.

How's about this; if you don't like what we're talking about, go away.

Nobody's holding a gun to your head.

But stop with your bullshit. It's too obvious.

I posted this at the lamont blog and MLN, and am serious about following up this 'purge'; let's all follow this up! Bob and Kirby, thanks so much for all your great work!!

Thanks Ned, Tim, Tom, and everyone for all the great hard work and commitment to this progressive cause. As I slowly begin to recover, I plan to try to instigate a real ‘purge’ – of Dems in positions of power who supported a candidate running against OUR Democratic nominee. From my DTC and any others I might be able to influence, to the House speakership.

I also am keeping nedlamont.com in my auto-opening suite of tabs, and will keep coming here and to MLN.

Let’s rock the boat some more!

Thanks again everyone! Luv you all.