Will Lieberman use his HS Chair to protect CT? 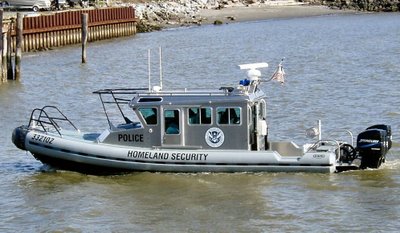 When Congress reconvenes in January, Sen. Joseph Lieberman will have a unique opportunity, as Chairman of the Homeland Security Committee, to make Connecticut safer in the event of an emergency.

WASHINGTON -- A major goal of Connecticut disaster watchdogs is to have one desk in Hartford to keep an eye on statewide threats 24 hours a day.

If a train derailed near New Haven, an explosion rocked New London, or disaster jolted any other town, the command desk would instantly be able to tell whether the problem was an isolated event and suggest ways to respond immediately.

But under the current system of distributing federal funds, that desk is not likely to get the $1.5 million or so it needs anytime soon - not even with Democrats now controlling Congress and promising to make implementing recommendations of the 9/11 Commission one of its first priorities.

So, according to the current system, we can't get a lousy $1.5 million to fund a single emergency desk.

Does that strike you as slightly crazy? In this climate of heightened threat levels and endless Administration talk about the imminent dangers of terrorism and natural disasters, we here in Connecticut don't even rate a crummy million and a half from the Federal Govt. to have a single department monitor our state? Jesus.

Speaker-designate Nancy D. Pelosi, D-Calif., lists the 9/11 panel's suggestions as one of the six items she plans to have the House address, and probably pass, during its first 100 legislative hours after Democrats officially take control of the House Jan. 3.

But one major suggestion has not been passed and probably faces a rough time: "Base federal funding for emergency preparedness solely on risks and vulnerabilities, putting New York City and Washington, D.C., at the top of the current list. Such assistance should not remain a program for general revenue sharing or pork-barrel spending."

Yes please. If there's any single area where pork ISN'T a good idea, Homeland Security is it.

Connecticut could benefit from a new system that sets tight standards for giving out money, though success is not guaranteed. While the state has heavily traveled interstate highways, the Naval Submarine Base at Groton and nuclear power plants, it also lacks the big urban areas that experts say are attractive terrorist targets.

So far, nothing has been done to implement the commission's suggestion. Before it went out of business 11 months ago, the panel issued a final report card on the recommendation's progress.

Helping lead the Senate charge has been, and will be next year, Sen. Joseph I. Lieberman, D-Conn., who will chair the Homeland Security Committee. He maintained this week that the legislation he has pushed in the past "is by far the best solution for a state like Connecticut, which has a number of high risk factors but has been denied high risk funding because our urban centers do not meet arbitrary population cutoffs."

Here's your chance to shine, Senator. Show us doubters and skeptics that you really DO have our best interests in mind. Nothing would make me happier than to be proven wrong about you. Go ahead and be my frickin' guest, would you?

Lieberman voices a common New England complaint about the current system: No one understands completely the rules for awarding money, and the Department of Homeland Security's explanations of how it gives grants remains vague - or, as the senator put it, "constantly fluctuating and ... a work in progress."

You're at the helm, Senator. Steer this ship safely into port. Make us proud.

Try asking questions about stuff like experience in disaster management; plans for improving disaster response; proposals for integrating all the various sub-agencies into a single, cohesive group...you know, all the obvious stuff.

"Here's your chance to shine, Senator. Show us doubters and skeptics that you really DO have our best interests in mind. Nothing would make me happier than to be proven wrong about you"

I hope you stick to your word B.A. And if not maybe you call Ned Lamont and have him pay the $1.5 million god knows he has it. he just blew $13 million trying to buy an election.

Or Joe can dip into his petty cash and cover it.

i have faith in lieberman running homeland security. hes always been strong on national defense.

I'm glad you're so sure about that. Allow me to be skeptical, because while Senator Lieberman was on the Homeland Security Committee, we've lost 70% of our funding since 2004.

I don't know about you, but I feel about 70% LESS secure than I did 2 years ago.

We're doomed. Joe hasn't a clue. it's the peter principle in action.

what? this is CONNECTICUT-nothing is here. you think connecticut is a top priority on the terrorists hit list? maybe you only think of connecticut, but i think of america. washington dc, new york, chicago... big cities need more protection than connecticut.
fuzzy turtle, who the hell do you think you are? i doubt you have all the answer and know more than joe lieberman. youre some blogger, youre not in contact with the fbi, cia, or "inside" information.

Nothing in Connecticut, you say?

Lieberman has rarely, if ever, had the state at heart. Now, with Dodd doing a test run for the presidency, and Rell oblivious to everything as usual -- I hope no one is pinning their hopes on Lieberman. He can't seem to figure out if he's democrat, republican or independent. He's up for sale. Does anyone really think he's going to actually DO something for the state? C'mon.

I've got two thoughts on this issue:
1. For the most part, I think the terrorist threat is overblown (but NOT nonexistent), and that's one reason why the feds are unwilling to actually ADDRESS it in a realistic manner. Too many of them WANT a huge supposed threat to give them a chance for more pork, but don't want a stream-lined effective response capability to the much smaller danger that actually exists.

2. Realistically, if terrorists wanted to mess up the American psyche, they'd IGNORE the major cities and go after secondary locations nobody would ever expect to get hit -- i.e avoid NYC or the sub base and, in our area (I work in Putnam), hit one of the casinos instead. Lots of people, important to eastern CT's economy, but not a place anyone even thinks of until the headlines come out the next morning.

Why on earth should anyone think that Joe, after 18 years of ignoring this state, will suddenly give a shit about it? I have been calling and writing his office for about 5-6 years straight now, trying to get answers on how he will vote, or Why he voted for certain issues. He is a terrific flim-flam man. Should be selling used cars!
For those that believed Joe saved the sub base, I have news for you. That Team CT consisted of every major politician in this state, the AG, retired navy Admirals, Washington Consulting Group, and a coalition led by John Markowitz, John Casey(EB), Tony Sheridan (Ch.of Commerce), etal.

Joe is liar and a cheat.

pamb- shhhhh you are showing how stupid you are

Tedious liebertroll, take your anonymous self down to your local recruiting office, and enlist in Holy Joe's holy war.

We'll all be so very proud of you.

Sorry to break it to you guys. But yes Connecticut does rate above Nebraska but only slightly. I doubt obama.. I mean osama has ever heard of New London. I honestly beleive that Joe is the best Connecticut has to offer. Him and the Mystic Seaport the only time I've vacationed in Conn. Now, since I have no feelings for Conn. you're wondering why I read your site. Well first time for everything. I had a sudden urge to know the primary schedule, did a google search for primary schedule and this site was #1. So I guess this is the 3rd good thing to come from Conn. Btw, Joe is strong on Defense. At least more than anyone else from Conn besides our Bob.