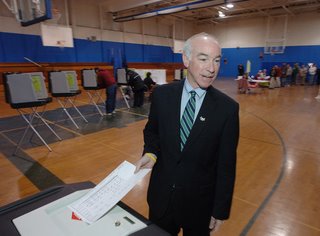 As of 10:35 this morning our office has received results from 43 of the 65 2nd Congressional District towns, meaning there are still 22 towns which have not yet reported to us. Of those 22 towns, the following 9 towns were scheduled to do their recanvas today:

It is our understanding that the remaining 13 towns – Bolton, Bozrah, Brooklyn, Clinton, Durham, Griswold, Groton, Hampton, Montville, North Stonington, Norwich, Preston, Windham - have done their recanvas; we are waiting to get their results.

With these 43 towns having reported in, we show Courtney right now leading by 76 votes. These are the results we have as of now:

I will have more updates as we get more results in.

FYI, of those remaining towns, only Ashford has the new OS machines. All the other towns use the old-style lever machines. More as I get it.

I'll be at Canterbury tonight.

I believe that Courtney is up by 90 votes at 3:00 or so. I hope that people who have info will post it, as jj did! This is so nerve-wracking!

It's very interesting to watch each group of towns change the numbers.

I wouldn't doubt that Simmons calls for a total recount when this is done if he ends up short. And I wouldn't think he was out of line if he did.