Then he continued with a statement that depleted every last bit of irony left in the Cosmos: 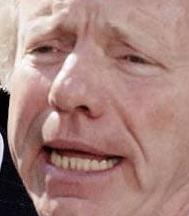 "When I give my word I stick with it, and I am definitely going to organize with the Senate Democrats."

Of course, we don't need to go over a list of Lieber-lies, do we?

"Eighteen years is enough"
"I will not run as an Independent"
"I was never in favor of privatization of Social Security"
"Ned Lamont said 'partisan frenzy', I didn't say that."
"I won't miss more votes than my predecessor"
"...it shouldn't take more than a short ride..."
etc. etc. etc.

No, Joe's lies are very much out there for anyone to see. He sucked all the irony out of the Universe with that one statement. From now on, everything has to be taken completely literally. There's simply no irony left after Joe got done with it.

When it comes to Joe Lieberman, you can be absolutely sure of one thing:

""I don't feel that I owe anybody anything but a hearing and then the confidence that I will make the judgment of what I think is right and what I think is best for the people of Connecticut. Watch me," Lieberman said."

"Lieberman was heartened that the new Democrats populating the House are moderate to conservative and will therefore contribute to a centrist dialogue."

""There is a lot on the line here for Democrats, because if Democrats go too far to the left or are too extremely partisan, then I think it will make it harder for a Democratic president in '08," said Lieberman, the party's vice-presidential candidate in 2000 and presidential contender in 2004."

BUT Ned helped us expose Joe for what he is and where he really stands, for which we owe profound thanks.

How long will this 'stickin' with the Democratic party' last? Should we expect another kiss from W. next January? First he pandered to the GOP, then the Democrats in CT, and now he's pandering to the Democratic Leadership in the Senate to keep his posts. Whatever it takes!

Joe will forever be a thorn in my side and I don't think I will ever be able to give him the benefit of the doubt on anything he says! I'm ready and willing to make his life miserable, because he DID NOT win as a Democrat, he won as a lying, sleazy, single member of his Connecticut "it's all about me" LIEberman party!

Joe will have to be watched carefully. When we propose universal health care and a redeployment of troops from Iraq, we'll have to see where he stands and whether he undercuts the Democratic position. And how much money he is taking from the pharmaceuticals and defense industries.

p.s. Don't pull your hair out. Just keep an eye on him.

Joe is wrong about the Dems in the House being centrist. The majority of them are actually economic populists, not free trade corporate shills.


Also, morning's courant article talks about how Joe did not return Harry Reid's phone call Tuesday night. No, rather he got around to it on Wednesday.

PLEASE folks, write to Harry Reid and tell him you DO NOT want him giving back Joe's seats, especially when he is already flaunting his self-imagined importance for his vote, and to NOT GIVE HIM BACK his seniority and seats. That is a Democratic seat, not an CT. for Lieberman Party seat! We have a 51 seat majority, we do not need to kiss Lieberman's ass.


Also the DSCC and the DCCC. I personally am sick to my stomach with Emmanual and Schumer. Taking credit for the win, when without Ned coming out in the Spring as Anti War, they would still be sitting in the minority!

I have a serious question for the writers and readers of this blog please respond:
Is it more important to you that a senator (either Demo or Rep) follows their party’s voting policy or to vote for what they feel is in the best interest of the people they represent?
I have a strong opinion on this but I want to hear what you think and maybe spark a well behaved debate

P.S. I feel that this question is the core of what’s wrong with our country’s politics and BA and Kirby I especially want to hear from you

Adam, I'll respond to your question.

Of course the votes should be for the best interests of the people. I happen to think that the Democratic party better represents the will of the people, and when someone like Joe Lieberman breaks from the Dems, he usually is voting for something that will negatively affect the people.

If your question was, "Which party best represents the issues of the people?", I would answer "Democratic Party, more of the time than the Republicans".

I can't understand how some of Lieberman's most important votes were in the "best interest" of the people. I feel that he chooses to support his sponsors rather than the people, and I think it's a terrible shame that he won reelection by saying he votes for people's best interests, when in fact, he votes for SPECIAL interests.

I'm not someone who insists a person votes along party lines 100% of the time. In fact, that would be awful.

But I do insist that a Senator allows his decisions to be influenced ONLY by the good it will do for the people, not the lobbyists and who they represent. I don't need to list again Lieberman's heinous record on critical votes, do I?

No need to recite Joes record I think we all know it well. My question was not only refering to Lieberman but also looking to 2008. I think I can say that McCain looks in good position to run and win. I think you will see the Republicans treat McCain like the demos treated Lieberman. If this is the case then don't you think that having people in office who are not so partisan and work together is better for the well being of this country. If there was not so much polarization in Washington I would think much more could be accomplished for the greater good. B.A. Disagree/Agree?

McCain lost any chance at being elected when he meekly supported Bush's recent torture bill. To me, that showed the boundless depth of his ambition.

John McCain always, and I mean ALWAYS, spoke out against torture. UNTIL the Bush regime approached him and said if he didn't support the bill, he wouldn't get any party support in his presidential run.

If he stood his ground and voted his conscience, I might have considered him a viable leader. And he might have had a chance, because most Americans are shocked and disgusted by that awful bill.

But he folded and fell into line. Just like the rest of them.

So...no, I don't think it's possible to be non-partisan as long as the Republicans continue with these tactics.

BA Thanks for the Insight. I am totally against the torture bill and its shocking that something like that could ever be passed. But I do admit that some levels of torture should be used just as it always has but without the consent of congress. I also think the no one should ever question McCain’s views on torture unless you have spent 5 1/2 years in a Vietnamese prison camp.

"...I also think the no one should ever question McCain’s views on torture unless you have spent 5 1/2 years in a Vietnamese prison camp."

I disagree strongly with that statement.

You don't need to have been tortured to know that torture is absolutely wrong.

It troubles me deeply to see a man like McCain so easily shove all his most closely held beliefs aside in exchange for a shot at the White House. That's what ambition can do to a man.

God help us all if he somehow wins.

"If you want loyalty, go and buy yourself a dog." -- Joe Lieberman

"If you want loyalty, go and buy yourself a dog." -- Joe Lieberman

Does he mean Jim Amann?