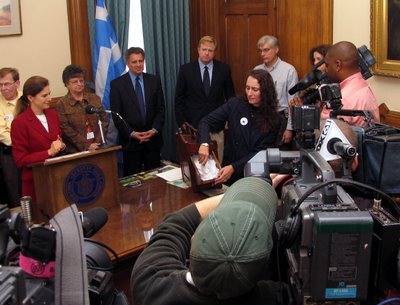 (A League of Women Voters official is drawing the names of the precincts from a ballot box, while Secretary Bysiewicz, various Town Clerks, Andy Sauer of Common Cause Connecticut, and others look on.)

An important issue with regard to the new voting machines is to be able to verify their accuracy. When the SOTS's office selected the Diebold OS machines, they also decided to manually audit 20% of the machines to make sure they reported the totals accurately. This audit is completely separate from the 2nd District recount, and was scheduled months ago.

Here is the press release from Dan Tapper, Communications Director:

In an effort to ensure the security and integrity of Connecticut’s new optical scan voting machines, Secretary of the State Susan Bysiewicz said today that numerous polling places where these machines will now be audited to determine how well the new technology worked. Officials from the League of Women Voters randomly chose these precincts at a news conference today in the Office of the Secretary of the State.

The precincts chosen for the audit are included in an attached chart. The audits will be performed by the Office of the Secretary of the State with the assistance of the University of Connecticut’s Department of Computer Sciences, which has helped Secretary Bysiewicz’s office in the selection of optical scan technology as an eventual replacement of all of the state’s lever voting machines.

These seventeen (17) polling precincts represent twenty percent (20%) of the eighty-seven (87) polling precincts in the fifteen (15) cities and towns which used optical scan technology this year in the First, Third, Fourth, and Fifth Congressional Districts, Secretary Bysiewicz said. As most are now aware, the ten (10) cities and towns in the Second Congressional District reviewed every ballot in the context of the recount already. UConn will assist with a technical review of those machines.

“Security is paramount when it comes to the integrity of our elections, which is why we chose optical scan technology to ultimately replace all of our state’s lever voting machines in 2007. As a result, we will work with UConn to perform random audits on twenty percent of the machines used this year, in order to see how well and accurately they worked on Election Day,” Secretary Bysiewicz said. “This way, we will know what issues need to be addressed prior to the 2007 elections, and will be able start addressing them right away.”