Senator Joseph "Second Time's the Charm" Lieberman was on "Meet The Press" today. 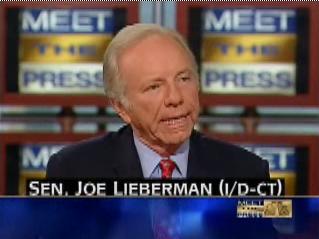 The network engaged in a little truthful journalism, obviously. (h/t Scarce; I still can't decide if that's a doctored image or not)

And be aware that while watching Joe Lieberman on TV, you may experience possible side effects: 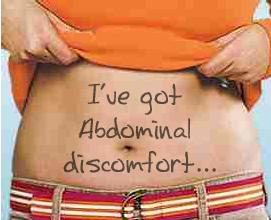 Update from Kirby: Here is the portion of today's transcript with the Joe interview. I don't know how it reads, but when I watched it, his comments made very little sense except for his intentions to use the D party to get his seniority recognized -- and then threw them under the bus by insisting there be a BIpartisan Senate committee on Iraq to make decisions about the war. Because remember folks, Joe knows what's best for him, Connecticut and the nation -- and nobody is going to change that. Let us know your take on the video or written versions of Joe's remarks.
Posted by CT Bob at 11/12/2006 03:16:00 PM

Joe needs to be impeached. Let the investigations begin. He was not elected by the democrates of CT. His votes came from his republican base.

Uggggggggghhhhhhhhhhh! I'm so happy I only had to read the transcript because if I really had to look and hear this man I would need a new TV screen by now! I can't believe (oh wait, I can believe because of his over inflated ego) that this idiot wants to fight for the Office of Public Integrity? He definitely confused "integrity" with “temerity” with that one! Then he proceeds to give this long windbag bullshit about how he was misunderstood about his statement criticizing us for criticizing Bush during a time of war blah blah blah! Oh please! The only thing he got right was his statement: “But I wasn’t the Democratic candidate this November. “ Yeah, that's right Joe and you're not one now! I think every time this jerk opens his mouth more people are going to be turned off because we all know what kind of lair he is and he knows it too; otherwise, why all his stammering?

Fastest turn-around on a campaign statement in American history - from "No one wants to bring the troops home more than I do" to "We have to be open to sending more troops" in 5 days...

I'm kind of surprised it took Joe THAT long to go back on his word.

At least he's a consistent liar.

opportunist:
and what, 75% or so of CT Republicans supported Joe. I wasn't aware the republicans are so "strong & independent" but you learn something every day. Look, I don't care about "labels" for what box someone should consider themself in, I care about what values and principles does Joe as our Senator relate to? Those values that Dems. will stand up for like jobs, healthcare, working class families, finding a way to end the total destruction of our country's credibility and standing in the world on a failed occupation in Iraq that has already killed more than 150,000 people and already cost billions and billions of dollars, protecting social security and medicare - or does this Joe that you consider "independent" decide to stand with Republicans and push for bipartisan support of goals contrary to the principles that Dems will be standing for?
I haven't YET heard Joe say that he will take a STAND with the Dems on those values or hear him say he REJECTS the Republican party's agenda. All I've heard him say, from DAY ONE is he wants his seniority to remain and to chair a committee. Fine, so he should do so in a democrat-majority senate *if* and when he decides to use that seniority and position to take a stand and fight for the principles and values that the Dem. party won the support of the country on in the election.
I'm still waiting.....Joe, still waiting to hear you say you embrace those principles and will honor them for as long as you serve in the senate. Otherwise it will be 6 more years of wondering which side he's fighting for if not just for himself.

I just finished watching the Lieberman segment on Meet the Press.

The essence of his remarks was that he would caucus with the Democrats and he wants MORE troups in Iraq.

In this appearance he raised his pomposity to levels never seen before and he is sticking to HIS agenda on the war whether the people want it or not.

I tried to extend a personal olive branch by congratulating him on his victory in my letter to the Register, but after his appearance on MTP my good will toward him has been reduced to a level way below what it ever was before the election.

Guys - if he's such a sinister man, how did he beat your guy like a drum?

i hate to break it to all of you, but lamont was running for SENATOR, not PRESIDENT. lamont couldve stopped liebermans disgraceful 90% voting record with the democratic party (his crime, according to many of these party loyalists, is not voting 100% of the time with the dems), but do you honestly think bush would change the course because of one senator from ct who has no political experience? no, he wouldnt.

lamont ran a campaign against bush, not lieberman. he used liebermans name but distorted his record to look like bush.

Maybe the repukes votes are where the $387,000.00 slush fund went!!
If he thinks the double talk will work now, he is sadly mistaken..
Does anyone know if the FEC has responded to Lamont? They should have!
Don't let this go...you might get him thrown out!

Lieberman is the state joke, on national display. And the joke's on us.

THE ID: functions in the irrational and emotional part of the mind. At birth a baby’s mind is all Id - want want want. The Id is the primitive mind. It contains all the basic needs and feelings. It is the source for libido (psychic energy). And it has only one rule --> the “pleasure principle”: “I want it and I want it all now”. In transactional analysis, Id equates to "Child".

What's more important here is that the backstabbing elite of the Democratic party still back this guy...did you see one Lamont sign near a Delauro or Roy sign anywhere? Ha...the reason they cleared out of the Milford HQ after such a big win was so Schlossberg, Roy and company could all run up to hartford to party with Joe.

The machine won again...score: Democratic Machine 2, Blogosphere 0. What liberal, progressive will stand up next to get their nuts cut off by the Elite?

@Kirby -- you are right about not responding to the trolls, however, oxygen deprivation seems merely to enhance their zombie-like dedication to one of the biggest liars this state has ever seen. Limbaugh-like dittoheads.

I am looking forward to the results of the FEC investigation, unless they are manipulated by the Administration. Also, the voter fraud investigation.

Thanks for keeping this site alive!

If anyone is too lazy or cowardly to post as anonymous, they don't deserve a response. I don't care if you are pro or con. And the trolls come here because they have no place else to vent their venom about Ned. Their boy doesn't believe in discourse -- just the sound in his own head.

How is "gchaucer2" NOT anonymous? So if I post as kchaucer3, then I am credible? Your rules are ridiculous.

@ned-op -- I'll add your post to my schimpflexicon. Since when is a comment a rule? This isn't my website, so, I guess I can't make up any rules. And, basically, your not credible. I'd clarify my statement, but, it would be wasted on trolls. Have a nice day.

did you even understand what ned_op said, gchaucher2? code names arent any more credible than anon. youre surely mistaken for calling me a coward for not having a blog account. maybe the reason is im not a loser with too much time on my hands...

The point of getting a handle, is that several people post as anonymous, and if you're going to post here often, it helps us keep track of who is saying what.

It's like when someone calls you on the phone and you ask "who's calling?", if they don't tell you, you hang up on them, right?