Tonight was a great night! I'll be brief. Cause I'm tired. 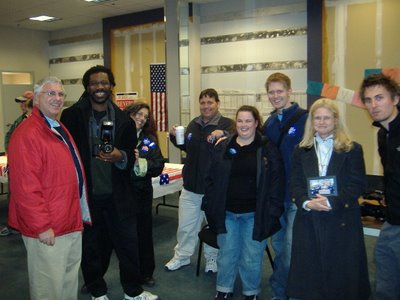 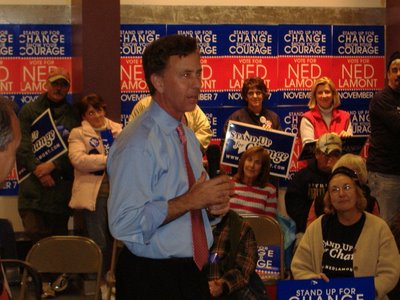 Ned spoke to an enthusiastic crowd at the Milford HQ, along with Governor candidate John DeStefano. 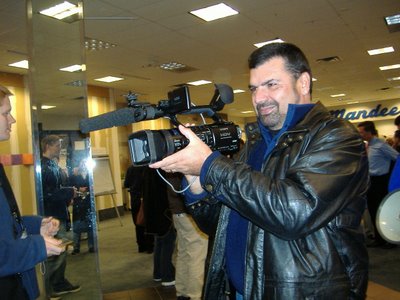 The campaign awarded us local bloggers with a dozen seats on the bus to New Haven. It was really nice of them choosing to end the campaign with many of the people who were with it from the start. Will gave me his expensive BBC camera to shoot some video for the documentary on the bus. 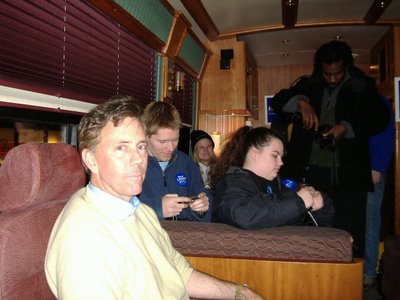 On the bus with Ned, Spazeboy, CT Joyce, CGG and CT Blogger. It was cool to sit and chat with Ned in this informal setting among friends. 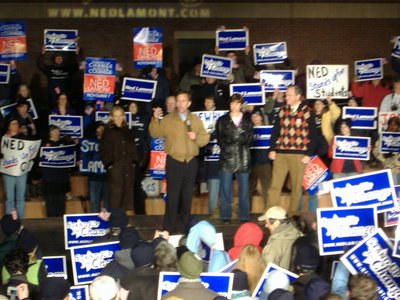 Ned, Annie with John DeStefano and his wife at the triumphant New Haven rally. Wow, was it great! I'm reminded of the convention when Malloy won the party nod for Governor; their party was fun, but this was even better!

I caught up with them in Bridgeport (posted a pic on MLN) but somehow managed to lose both the bus and the Kiss float.
Only Lorenzo.

This bastard took someone's Ned Lamont signs. I have screenshots of these MySPaces if necessary. Though Google cache should work as well for a while.

His comments on this guy's profile:


Oct 17, 2006 1:29 PM
yo I have found the ultimate Ned Lamont house, it literally has over 10 Ned La Douche signs in there front lawn. This weekend that will all change.
"

Yo - try using correct punctuation. It may give you more credibility.

Than again, probably not.

I love that picture of all of us standing in milford together. What a crew!

Do not respond to "ned_op". His remarks are to be deleted immediately.

CGG, yeah, what a fun night!