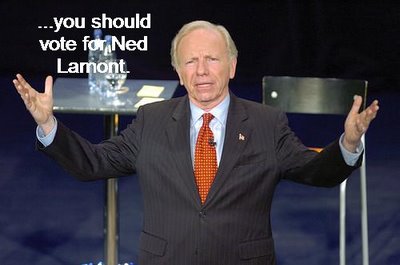 "...you should vote for Ned Lamont," Lieberman said.

The entire article is available here.

This is an example of the same way Joe Lieberman distorts Ned Lamont's stance on the issues. He takes something Ned says completely out of context and presents it as if it was exactly what he means.

How many times has Lieberman tried to mislead the voters by repeating what he knows is inaccurate by saying that Ned Lamont wants the troops out of Iraq "by July 1st, 2007, no matter what!"

This has been repeated endlessly by Senator "Will Trade His Soul For Six More Years" in his commercials.

We all know that Ned supports a firm deadline for withdrawal, and was in favor of the Kerry-Feingold amendment last summer, when it would have been ONE YEAR from the date it was supposed to be adopted. But Joe Lieberman, in his campaign of corruption, knowingly spins the truth into something that resembles a lie.

So, if you want to fight this sort of lying, help get everyone you know to do what Joe says you should do:

And don't forget to vote yourselves.

We are about to discover how many CT voters are willing to use their vote as a lethal weapon by Deciding Un Informed and screw the consequences.

Something for Everybody turns into Nothing for Anybody - watch it morph.