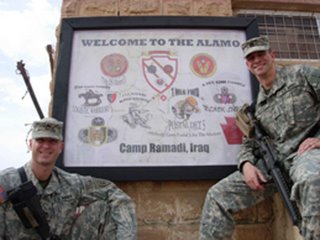 These are the soldiers who created "Lazy Ramadi" a musical tribute to their time in Iraq. They are safely home now.

You can check in with VoteVets and see which veterans from Afghanistan and Iraq, running as Democrats, will be in the new Congress.

The United States Wounded Soldier Foundation is collecting clothing, shoes, CDs, CD players, and much more for the soldiers airlifted to Landstuhl Air Base in Germany for medical care. They don't have carry-ons when they are evacuated, so they need clothing to wear during their recovery and items to help them pass the time. Monetary donations are also welcome.

Saturday and Sunday, CNN will broadcast "Combat Hospital" a documentary about the nurses, doctors and medics who work the front line care centers in Iraq. I've seen clips on CNN this week, and it looks like an amazing program. You'll learn that the suffering over there is not limited to wounded service members. Check the link for times.

And finally, I am asking for your thoughts and prayers for a nurse with whom I work and her son, now in Baghdad. He started in Afghanistan, and felt a real sense of accomplishment about the progress they were making in that country. However, before they were able to reach a point where they could turn things over to the Afghani citizens, they were pulled out and sent to Baghdad. Now he has no sense of satisfaction, he doesn't see progress, and he just wants to end each day alive. His mother, who met his father because her brother and he were POWs together in VietNam, is afraid to watch the news because she can't bear to hear it was "another bloody day in Baghdad," yet not knowing is even worse. She can hang on for Sundays when her son can use phone cards to call home (we're spending how much every day over there and we still can't let these guys and gals call home for FREE???) I didn't like the idea of invading Iraq from the beginning, but knowing this incredibly brave woman and what she is going through (multiplied by 100,000 more) is what makes me continue to work to end this war. Remember her and all those like her on the Veterans' Day.
Posted by Kirby at 11/11/2006 06:05:00 PM