Don't say we didn't warn ya! 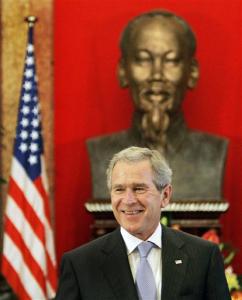 (Two infamous leaders - GW Bush and HC Minh)
Here we go. The election is over, and George knows he can count on Lapdog Lieberman's vote when this bill comes up before the Senate. Joe already made it clear how he'd vote when he said yesterday that we MUST stay the course in Iraq.

Which would mean (if you're keeping score at home) that the Senate will be divided 50-50 on the bill, giving Dick Cheney the tie-breaking vote.

Anyone care to guess how ol' "Eagle-eye Dick" will vote?

Military may ask $127B for wars
(CT Bob: or is it $160B?)
Posted 11/16/2006
By Richard Wolf, USA TODAY
WASHINGTON — The Bush administration is preparing its largest spending request yet for the wars in Iraq and Afghanistan, a proposal that could make the conflict the most expensive since World War II.

The Pentagon is considering $127 billion to $160 billion in requests from the armed services for the 2007 fiscal year, which began last month, several lawmakers and congressional staff members said.

Since 2001, Congress has approved $502 billion for the war on terror, roughly two-thirds for Iraq. The latest request, due to reach the incoming Democratic-controlled Congress next spring, would make the war on terror more expensive than the Vietnam War.

Sen. Kent Conrad, D-N.D., who will chair the Senate Budget Committee next year, said the amount under consideration is "$127 billion and rising." He said the cost "is going to increasingly become an issue" because it could prevent Congress from addressing domestic priorities, such as expanding Medicare prescription drug coverage.

Rep. Jim Cooper, D-Tenn., who put the expected request at $160 billion, said such a sizable increase still "won't solve the problem" in Iraq.

Bill Hoagland, a senior budget adviser to Senate Republicans, said: "At a minimum, they were looking at $130 (billion). If it goes higher than that, I'm not surprised."

The new request being considered for the war on terror would be about one-fourth what the government spends annually on Social Security...

(CT Bob: Gee, think your mom & pop might like to see their S.S. increased 25% instead of wasting the dough on that bottomless money pit in Mesopotamia?)

...and 10 times what it spends on its space program.

The White House called the figures premature. "They don't reflect a decision by the administration," said budget office spokeswoman Christin Baker. "It is much too early in the process to make that determination."

Before the Iraq war began in 2003, the Bush administration estimated its cost at $50 billion to $60 billion, though White House economic adviser Lawrence Lindsey had suggested in 2002 that it could cost as much as $200 billion.

(CT Bob: and Larry Lindsey was asked to resign from the White House in December of 2002 after giving that estimate. If you don't agree with the Emporer, you lose your head.)

Growing opposition to the war contributed to Democrats' takeover of the House and Senate in this month's elections. Pennsylvania Rep. John Murtha, an early critic of the war who lost his bid Thursday to be the House Democratic leader, vowed to use his clout as chairman of the House panel that reviews the Pentagon budget "to get these troops out of Iraq and get back on track and quit spending $8 billion a month."

"The war's been an extraordinarily expensive undertaking, both in lives and in dollars," said Senate Budget Committee Chairman Judd Gregg, R-N.H.

The new request is top-heavy with Army and Air Force costs to replace and repair equipment and redeploy troops, Hoagland said. That's why the 2007 cost is likely to top the war's average annual price tag.

Overall, he said, "we're easily headed toward $600 billion." That would top the $536 billion cost of Vietnam in today's dollars. World War II cost an inflation-adjusted $3.6 trillion.

Leon Panetta, President Clinton's former chief of staff and a member of a bipartisan panel studying recommendations on Iraq for President Bush, said the Pentagon needs $50 billion to $60 billion to "restore the units that are being brought back here, to re-equip them and get them back to a combat-readiness status."

I have a question for all you Lieberman supporters out there.

It's a simple question. Just try to answer it.

How are we supposed to pay for this war?

Of course! I should have thought of that! LOL!

I hope those "indian casinos" are located in China because the chinese and Japenese are where we're going to borrow this 160 BILLION.

ct bob. your assumption that a vote on military spending will be (or should be) completely along party lines shows how little you know about politics. Even dems who strongly oppose the war vote to fund it. Cutting money that our troops need to prove a political point has not been done since Vietnam, and you are naive to think that every democratic senator except lieberman will do it. I know you are trying to keep up anger and emotion against joe after the election, but please try to do so intelligently.

No anon, my assumption is that we should already have a viable exit plan for Iraq instead of endlessly borrowing money to pay for this senseless war.

If you've been paying attention, that's been my position all along.

you wrote: "Joe already made it clear how he'd vote when he said yesterday that we MUST stay the course in Iraq. Which would mean (if you're keeping score at home) that the Senate will be divided 50-50 on the bill, giving Dick Cheney the tie-breaking vote."

This statement is completely idiotic. the vote for the 2006 supplmental was 98 in favor and 1 nay from a republican, 1 democratic senator not voting. Your implication that 50 democrats will vote against the next emergency supplmental is completely misguided. by implying that all of the democrats in the senate will choke off funding in opposition of the war, you have displayed your complete and utter imcompetence. Own it buddy, you've got a lot of rage going for you but not a whole lot of brains to back it up. This isn't something worth arguing about it, you should really just admit that you weren't thinking when you wrote that statement and post a retraction. prove to your readers that your credible, not stubborn.

So don't read it. You're so brilliant, why don't you write your OWN blog?

you are making people dumber, post a retraction, admit your mistake. When Jenny Medina wrote that lieberman never said "stay the course" did you think it wasn't a big deal and that if anyone didn't like it they should just stop reading the new york times?

If I remember correctly, quite a few folks wrote in and cancelled their subscriptions to the NYT. I don't read it anymore because it no longer is the paper I remember from my younger days. Not looking for a regurgitation of my position, just facts fairly presented.

RE: the $$ for this war. Perhaps if some actually oversight were initiated regarding the waste in spending and fraud by Haliburton and that ilk, perhaps we wouldn't be dumping so much money into the whirlpool to oblivion. Seems I heard Baker say that there will be no victory in Iraq. Of course, I always dupe myself into thinking my tax dollars are going to the Smithsonian or Library of Congress.

In a letter, the senator asked the president for $400 million in grants for port security."

Unfortunately, Bob is right on. When HoJoe went to the likes of Mel Sembler for money, he probably made a Faustian bargain. I cannot believe that Mel Sembler, Ambassador du Sade and his species, expect nothing in return for lots of money.
Anonymous that is what we call rubber stamp congress. Lieberman and his Republican colleagues are the worst. Even if Dems have to approve the budget, they should do so carefully, looking for all the blatant signs of the usual egregious corruption and war profiteering in lieu of appropriate body armour we have seen these past few years. You can expect that from Kerry and Ted Kennedy, but not from HoJoe rubberstamp Lieberman.

Mui,
You only see what you want to see.

So far, not a single Lieberman apologist has suggested how we're supposed to pay for this war.

I guess I made my point. Neither Joe nor they have an answer. Just keep spending money we don't have. Great.