Not What You Say, but How You Say It 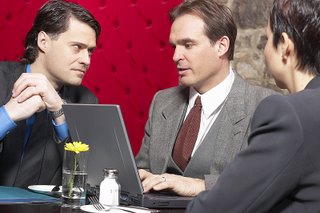 The mighty message boys have their talking points out and boy, are they in lockstep. Pay attention to these two words:

Investigation:
(standard definition) the work of inquiring into something thoroughly and systematically
(new) the act of a Democratic member of Congress who asks a question about what happened before

Together:
(standard) in contact with each other, in each other's company
(new) in lock-step, following orders, reading the same talking points without dissent

Use our new vocabulary words in a sentence:
The Democrats in charge of congress ARE investigating, but are NOT together.

It was fascinating to have the TV on in the background while this meme was pushed forward by every single talking head speaking on behalf of "the Republicans" today on CNN and MSNBC. I am in awe of how quickly these wheels are set in motion and how they become the new lexicon. As a Democrat, I wish every person speaking on behalf of Democrats today had a similar vocabulary of code words to push. As I have posted here before, our greatest strength is also our Achilles heel.

As a party, the Democrats have always seen things in a thousand shades of gray. We believe in examining different aspects of issues, listen to people with different points of view, and cobble together a position. While I consider those strengths, the problem we have as a result is that we do not see everything as black and white, or good and evil. And the one time we tried it, Dems voted for authorizing military action in Iraq.

Joe Biden would like to start the next Congress as chair of the Foreign Relations Committee by holding a week of hearings to hear from people involved in the situation, ask questions, expect truthful answers, and try to figure out how we got to where we are, so that can lead us to a way out. I call that doing his job under the "oversight" role of Congress. If others think that is an "investigation," they're in for a big shock if a real investigation is ever needed in the next two years. (And I don't mean the R version of an investigation that put the nation's business on hold while they investigated Bill Clinton's sex life. Oh, no. Gee, what message did that folly send "the terrorists"?)

Biden thinks that in the end, a 3-state political solution may be the most effective way to deal with the violence there. According to the new meme, any Dem who disagrees with that concept is proof that our leadership is not "together."

"Not Together" now means not being in lock step, not seeing the world in black and white, holding more than one thought in your head at a time, and considering that you might have made a mistake in the past. The meme today is that's unacceptable, and suggesting it means "weakness" to "the terrorists."

So, readers, how do we challenge the newest meme that questions are investigations and disagreement is dangerous? Why is it that Dem pundits don't get the same talking points, the way the Repub pundits do and they all spout them on the same day on different TV shows? Help me try to figure this out in our comment thread.
Posted by Kirby at 11/11/2006 04:22:00 PM

Kirby, it's called “Problem Solving” and the reason why Republicans call it "not together" is because they don't know what it means to work together on a set of different ideas – formulating a solution. This is what leadership is all about to come together with good ideas to form a workable solution. Is that all these stupid Republicans can do all day, sit around thinking of “polarizing slogans” and finger pointing. Someone needs to remind them that’s why they lost the General Election!

better yet, someone needs to remind them that’s why they're now the miniority party!

I'd like to urge everyone to go to Harry Reid's website and send him an email demanding that he not give Joe the Chairmanship of Homeland Security and Governmental Affairs.

Joe doesn't deserve it because a) he's no longer a Democrat, he's the Senator from the CFL party; b) Democrats in CT rejected Joe in the primary and in the general; c) Joe blackmailed the Democrats to give him seniority, threatening to caucus with Republicans; d) Joe supports Bush/Cheney policies, and Democrats across the country rejected those policies on Nov. 7.

Joe was not elected as a democrat. Democrates in the state of CT rejected him.Had the democrates in DC supported Ned they would truly have a majority in the Senate. As I see it they do not. Joe should be striped of his so called self appointed senority. Before his ego gets any more out of hand if that is possible.

So what would keep Joe from going to the other side and giving the Rs the chairmanships if he doesn't get something from the D side? I'm not saying what we should do, but I have to think that having chairmanships in the Ds hands, we are better off, no matter what Joe does after that.

A rose by any other name...

Joe IS, for all intents and purposes, a Republican. Which is why we rejected him, and why Bush/Cheney campaigned for him, and why the majority of Republicans voted for him.

Now that we're the majority party, our Chairmanships should go to loyal Democrats whom we can trust to adhere to our values.

Joe will do what he has done all along -- vote against us whenever it serves his purposes -- no matter whether he does it from our side of the aisle (disingenuously calling it bipartisanship) or from theirs. My feeling is that he should be defined for what he is, and that isn't a Democrat.

Chele...
I dont understand how you can say Joe is a republican. He votes with Demos 92%. I think that makes him more Demo then Repub. Dont you?

Chele-
Easy I'll explain. I am guessing that you are not from CT or haven’t lived here long. Alan Schlesinger (great guy) would never win the Senate seat in CT. CT is too Democratic it would never happen, even Alan understands this. The Republicans realized that it is better for them to have a moderate Democrat (Joe) then a far-left Democrat (Ned) to obtain the Senate seat. With this understanding the Republicans backed that faster horse, that’s all. In CT registered Republicans typically vote for Democratic Senators that’s the way it is. What I think you are getting confused on is the political parties don’t always back a candidate who will most certainly lose especially if there is a third party involved, Other way to look at this is that Joe got 33% of the Democratic vote in CT (that’s 1/3) which would never happen if he was even a little Republican. The bigger question for you Chele is what’s different about Democrats and Republican? I’ll tell you, their views on different issues and Joe agrees with Democrats 92% of the time, so therefore he is a Democrat. To be completely honest I would not want a government leader who agrees with a party 100% of the time. It means they can think for themselves. Hope I helped you understand

Don't be so pedantic. You're showing your age. I've been a CT resident longer than you've probably been alive -- and I really doubt there's much you could help me, or anyone else here for that matter, understand.

If you were a bit older or knew your history, you might know that Joe was originally hand-picked by CT Republicans to run against Weicker, who was too liberal for them.

You might also understand, if you were knowlegeable at all, that CT Republicans always chose a "sacrificial" candidate whom they were sure would lose to Joe, because Joe has always been their guy.

You're not the Farrell Adam, are you?

dont know who Farrell Adam is. Unless you have been a CT resident since 1946 I would watch what you say. I also cant debate made-up facts. sorry

Nothing made up. History, plain and simple. You might not have been aware of it, but that doesn't make it any less factual.