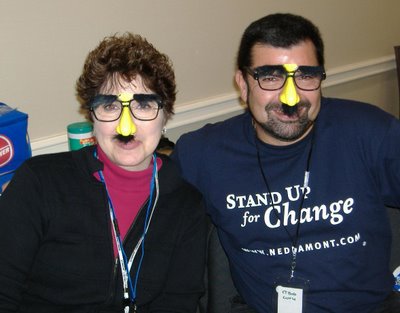 We're in the "war room" right now. I'm with Kirby, Spazeboy, Will from the BBC (he always says he's from "the BBC", but he's really from this little production company that's located in a garage somewhere in Exeter), Caffeinated Geek Girl & Geoff.

The War Room is a lot less crowded than last time, because there are so many other elections going on nationwide right now. Which is good, because the MSM isn't bothering us as much as back in the primary. Thankfully.

Uh, may I see a picture of Caffeinated Geek Girl, too, pls?
:)

Btw, as a foreign reader, I don't really get the joke with those masks. That's a reference to Groucho Marx? Or the famous yellow nose of Texas?

Methinks it's a reminder of the Kirby disguise from the primary blogger war room.

i'm workin a state senate campaign right now in southern CT and i want to make it to the lamont bash. any guess on when the results will finish coming in/when ned will speak?