About that Job Creation in Stamford... 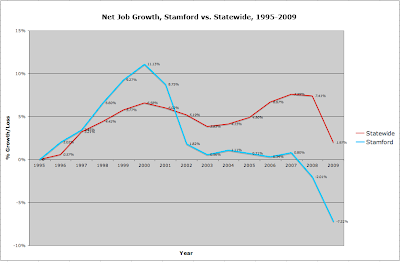 MattW over at MLN has done the heavy lifting and created a number of graphs showing Dan Malloy's record on jobs in Stamford during his tenure from 1995-2009. Technically, Malloy may well be correct that somewhere in that 14 years, 5000 jobs were created. But it takes work to do worse than the state overall in net job growth.

Further, when compared with the 169 towns in CT, Stamford ranks 130th. Only 12 municipalities with more than 10,000 jobs did worse than Stamford, which ranked 38th out of 50.

Here in CT, journalism is committed rarely, so run, don't walk, over to MLN and read MattW's full report. This analysis makes me wonder why anyone would want Dan Malloy to do to Connecticut what he did to Stamford.
Posted by Kirby at 7/06/2010 06:07:00 AM

Mayors have even less than governors to do with "job creation"....

That Lamont refuses to debate ruins any credibility he might have had.

We're amazed that fellow Greenwich rich-boy Foley didn't pull the same stunt, he's been dodging appearances where Mike Fedele was also appearing with increasing regularity now that his handlers have finally figured out that the former Ambassador can't speak well with notes, and barely at all without.

"That Lamont refuses to debate" is bullshit and you know it.

Quite the contrary - Lamont's just a rich guy, who having no-doubt traveled and having seen the 7 wonders of the world has his heart set on now going on an ego trip.

So if Malloy wasn't that good as mayor, the clear option is to elect someone whose only accomplishment is serving as Greenwich town committee or something like 20 years ago.