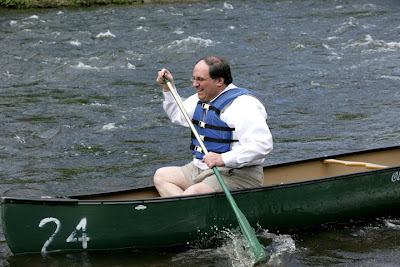 (Michael Jarjura up a creek? Image via the Waterbury Observer)
Kevin Rennie wrote that Michael Jarjura, the churlish mayor of Waterbury and candidate for State Comptroller, has challenged rival Kevin Lembo on his qualifying funds for the state campaign funding grant.

Jarjura is claiming that the funds raised by Lembo's exploratory committee when running for Lt. Gov. should be excluded from the $75,000 threshold Lembo raised to qualify for CEP funding. The SEEC allows a candidate to roll over funds from an exploratory committee for one office to another with some restrictions.

I don't know what those restrictions are, or if any of Lembo's contributions would fall under that exclusion. The comments section of Rennie's Daily Runctions has some interesting (and a bit caustic) discussion of the issue, including how a "campaign committee" is different from an "exploratory committee" when it comes to the qualifying rules.

I'm sure we'll hear more on this issue, as Michael Jarjura is sure to lose in an even contest against Kevin Lembo, so his only hope is to somehow find a sympathetic judge who will rule against Lembo. Judging from the recent history of financing decisions, Kevin will likely receive his grant and go on to win the Comptroller's job.

I find my self asking why so any de bloggers do not like mike???? How you know lembo is going to win. as of right now i voting for ever person on line b but for the comptroller race im still split.

There's a lot of reasons. Jarjura gave ex-con John Rowland a cushy 6-figure job paid for by Waterbury taxpayers. He's a favorite of the extremely conservative religious group FIC, so that means he's against marriage rights and women's choice. Jarjura was a "Stick With Joe" Democrat, meaning he betrayed his party. These are just a few reasons.

Then there's the fact that Jarjura is simply "job shopping", having explored various offices such as Gov, Lt. Gov, Attorney General during this election cycle, before settling on Comptroller (I guess the Secretary of State field was too crowded for him).

Kevin Lembo actually WORKED in the Comptroller's office for SIX YEARS. He is a proven advocate for state residents, and will no doubt prove to be a much better Comptroller than Mike Jarjura.

I hope that answers your question.