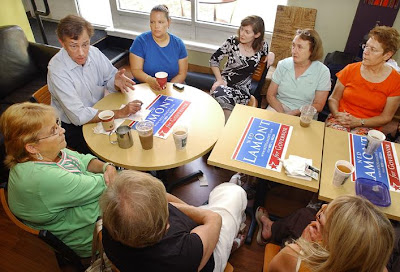 (Catherine Avalone | The Middletown Press 7.21.10)
Ned Lamont sat down with about a dozen women from all over the state to listen and discuss concerns at the fabulous Middletown eatery and coffee shop Brew Bakers (169 Main Street, Middletown, CT).

Hillary Federico from the Middletown Press has this story:

Lamont spoke with 12 women, all mothers and active careerists, about what it means to be a female in the 21st century. Topics ranged from healthcare and the environment to preschool and small businesses, with the casual atmosphere lending itself to an eclectic assortment of personal stories and individual concerns.

“In this day and age, in many cases you’ve got a single parent or, you know, both parents working and I’m very conscious of that,” Lamont said. “(Operating a small business) we know everybody that works in our shop; we know their situations, we know if their mom is ill, we know if their kid is having a hard time with daycare. If you work together in a communal way it will alleviate that problem. And I’m working hard to bring that family-oriented mindset to government.”

Some of the women commented on the difficulties of working while raising a family. Especially for single mothers, there's not a lot of alternatives when dealing with the current options available today.

(The) struggle to choose between a career and a family is an aspect of the working world that really bothered Lamont. A champion of the small business owner, Lamont said he is looking to improve local government in a way that will allow for it to accommodate the demanding lifestyles of Connecticut’s modern family structure.

“You want family-friendly jobs and family-friendly policies that make it easier and allow the people around this table to get a job and get back to work,” Lamont said. “And that includes preschool, after school activities, that includes adult daycare. You make it accessible to people so that it works.

The talk lasted well over an hour, with Lamont doing as much or more listening as talking. Read the entire story at the Middletown Press website.

Brew Baker's owner Eloise Tencher is a very gracious hostess; she even turned off the music so the video sound wouldn't be mucked up. And I don't know if she had anything to do with this, but during the entire meeting there wasn't a single smoothie that needed to be made (with the extremely noisy blender!)

I personally ordered the blueberry-pomegranate smoothie before the meeting began, and it was out-of-this-world delicious! I totally recommend it; but you should have a glass of room temperature water available to defrost the inevitable brain-freeze you'll experience by sipping it too quickly.

Really nice blog, Bob. And thank you for the nice recommendations and comments.
Looking forward to seeing you again soon.
Eloise

Couldn't help to notice that most of the tables were square.

Eloise, thank you again for being such a wonderful hostess, and I'll definitely stop by next time I'm in Middletown.

LOL anonymous, yes some of the tables were indeed square. I think we need more truth in politics, so from now on, I'm going to insist they either install fully ROUND tables at these talks, or they change the name of the next meeting to a "square table" discussion.