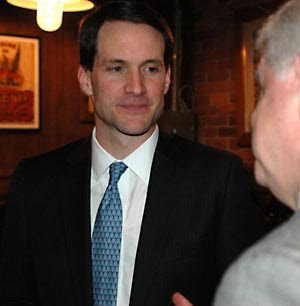 (Photo by Ken Krayeske from The 40-Year Plan)
One of the biggest issues on the national political scene this year is government waste. Well, we have home-grown legislators who are actually doing something about it.

Rep. Jim Himes helped pass a bill that will help eliminate around $100 billion in tax dollar waste. I don't know if we can get it, but a smallish chunk of that money, around 4%, would solve our state's looming deficit problem.

Maybe we can get the savings doled out to each state based on how much federal tax we pay in. Wouldn't that be awesome? Anyway, bravo to Mr. Himes for helping get some common sense (and much needed) legislation passed:

Congressman Jim Himes (CT-4) today continued his work to reduce the deficit by helping pass legislation that will eliminate nearly $100 billion a year in improper government payments that result from poor oversight by federal agencies. The Improper Payments Elimination and Recovery Act passed by a wide bipartisan margin and was sent to the President this afternoon.

“Taxpayers need and deserve a responsive, efficient government,” said Himes. “Families would never overpay their own electric bill, and their government needs to guard the taxpayers’ check book with the same vigilance.”