Malloy Desperation: Will Do ANYthing to Win 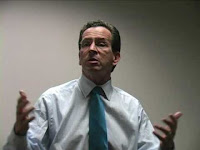 You know, Dannel, I was willing to give you the benefit of the doubt in this primary campaign. When I posted on the phony Stamford job numbers, I asked readers to decide -- what was more important: your claim of 5000 jobs created or the net loss of more than 10,000 jobs while you were mayor?

And I didn't call you out on your whining about debates until the Connecticut stenographers that pass for "mainstream media" repeated your complaints almost verbatim from your press releases.

But now you have pissed me off with your TV ad attacking Ned Lamont. It shows that you are no better than Mike Fedele who is attacking Foley, and nicely softening him up for a Democrat in the fall election, should Foley win. Is that what you want, Dannel? To take down another Democrat so "Nynahhh, nynahh" if you don't win the primary, the Democrats can't win in the fall? Are you that desperate a career politician that you'll do anything to win, including taking the party down with you?

Just this evening, the Courant posted an article about Mike Fedele criticizing your financial management as mayor because 3 Stamford city workers have been charged with embezzlement -- $400,000 of city dollars under your watch -- two of whom had been your employees of the month and one who worked for the city for 13 years! Here's a chance for an opponent to pile on. But here is the money quote:

Be a man, Dannel. Stand on your record. Quit the lying and the attacks. If your record is so unconvincing that even you have stopped talking about it, then you don't deserve to be governor.

Give me a break! That is not a real attack ad. No mention of Lamont. Republicans can not use Dan against Ned.
Some of you Monties act like Rove with your "Talking Points". Today's must be: Attack Dan for an Attack Ad!!
Truth has nothing to do with it, right?

Here is a comment from Sufi at MLN that does a great job on ISSUES -- maybe she could help the Malloy campaign! http://www.myleftnutmeg.com/showComment.do?commentId=68828

The Malloy ad is effective in pointing out that Lamont does not want to debate and that Lamont has not "created" many jobs. The Democratic Voter will have to decide on August 10, 2010 whether they want a candidate who has created around one hundred jobs and successfully run one company or a candidate who created an atmosphere the permitted the creation of around 5000 new jobs in Stamford that would not have been in Stamford without the recruiting and leadership of Dan Malloy. The Malloy Campaign admits that the total Stamford job change while Dan was Mayor is a negatve number due to statewide and country wide economic issues but emphasize that Dan actively recruited thousands of new jobs for Stamford. The point is that he could and will do the same for Connecticut as governor.

Malloy's campaign only admitted there was a net job loss after bloggers (Spazeboy! and others) posted that fact, and the normally somnolent local MSM finally picked up on it and made it front page news.

And it seem like Malloy isn't changing any of his commercials to reflect the reality of the massive net job loss; this is the kind of deception we've heard from the governor's office for the last two decades.

Do we really want a guy in there who seems to have difficulty with telling the truth?

Are you saying Malloy needs to advertise to tell the state that there has been an economic meltdown and we're in a recession, thus leading to massive job loss? Give me a break; if you're too stupid to realize that he was talking about jobs in a normal economic period then that's your own damn fault.

I'm saying Malloy knows most people who hear that someone created 5,000 jobs will think there are now 5,000 MORE jobs than there were before. It's dishonest, plain and simple.

If it were me running, I would simply drop the claim and start talking about all the good thing I'd do for the state if elected.

But at this point if Dan did that, he would be admitting he intentionally misled people. So I'm not expecting any clarification to the voters between now and the primary.

Once again, Lamont proves that he's the class act, while Malloy descends to politics as usual, Lieberman style.

So sad, because having met Mslloy several times, I believe he's better than that.

But when he surrounds himself with disgusting hacks like Roy O., who believes in winning at any cost, even if it costs the November election, it makes me doubt his judgment.

I'm a progressive who supports neither of these two candidates...

But sill, it is depressing to see the state's progressive blogging community turn on one of two not-very-far-apart-politically candidates and decide to eat him alive, while attempting to build some sort of wobbly shield around the other. It all reeks of petty rivalries, old scores unsettled, imagined betrayals, and sweaty desperation.

Do you guys expect to feel good about yourselves in the morning?