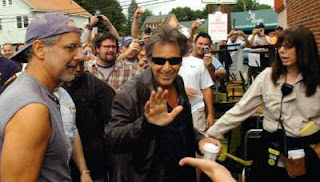 (Al Pacino between scenes while filming "Righteous Kill" in Milford, about a half-mile from my home - NH Register photo)
As some of you know, Connecticut's film, television and digital media production tax credit program is an area of interest for me, as I recently completed the CT Film Industry Training Program and I'm currently looking for employment in film production. In today's Stamford Advocate, Investigative Reporter Brian Lockhart examines the little known "middle men" involved in the tax credit program.

According to Lockhart, the program, while helping bring lucrative productions to Connecticut,

...is also lining the pockets of brokers who help visiting productions trade the credits to Connecticut companies. And the details of the transactions are not public, even to frustrated legislators, a Hearst investigation has found.

"The tax credit sellers have made millions. And I don't think they provide much value when you can have a program that does not need them," said state Sen. Gary LeBeau, D-East Hartford.

LeBeau, the Commerce Committee co-chair, is looking to streamline the credit into a direct cash payment rather than a transportable tax credit that can be resold at a discount.

There are obvious pros and cons to this tactic. On the upside, you'll eliminate the commissions that the brokers take out of the credit and the money will likely go directly to production costs in-state. Conversely, a tax credit might not even get used until well into the following tax year, effectively deferring the cost of the credit for many months; while a cash payment comes right out of the state's general fund immediately.

There are a total of 31 types of business tax credits in Connecticut that are transferable, with the film, television and digital media tax credits among them.

LeBeau said that if Connecticut were to instead offer a rebate, it could lower the incentives by the amount of profits the tax brokers are currently earning.

"You can actually give the maker of the film a lower percentage ... and they can get the same amount of money. You can eliminate the middleman, (and) you've cut the cost to the state," LeBeau said.

The story also discusses the fact that about 44 states offer some type of incentive to filmmakers. More than a dozen provide credits, and several others offer rebates.

There has never been an independent, professional study showing that tax give-a-ways to the film industry in Connecticut are of any benefit whatsoever to the people of Connecticut. (Just lots of that favorite alternative-to-logic: the anecdote.)

And guess what? There never will be...

You can be sure that the STATE never does any comprehensive, longitudinal cost-benefit reviews after it enacts yet another "Just promise to create jobs and you can have the store!" corporate welfare (sorry, "tax incentive") program.

I'm just being the devil's advocate here, Bill; by your logic there also hasn't been an independent study that shows the credit doesn't create jobs or stimulate the local economy. So really, nobody has a clear picture of whether the tax incentives help or hinder our economy.

I'd really like to know one way or another, because this issue is definitely a hot-button topic for my progressive friends. Who largely are against it, but when I ask for detailed reasons for their position, I never seem to get a satisfactorily coherent explanation.