In the latest Quinnipiac Poll, Ned Lamont enjoys a nearly double-digit lead among likely Democratic voters over rival Dan Malloy in his bid for the gubernatorial nomination.

Previous Q-Polls only questioned "registered Democrats", which is a larger pool and includes people who haven't bothered to vote for years. "Likely voters" are Democrats who have actually voted during the last few years, and are the ones who are most likely to drag themselves out of bed on August 10th and go down to their polling place.

So Lamont's current 9-point lead over Malloy in this poll is more likely reflective of his actual lead than previous polls that only questioned registered Dems. But you can't really compare the two polls when they questioned different sets of Democrats, so anyone who claims the race is tightening isn't working with valid data. Reporters who cover the political beat should know this difference.

UPDATE: Gallup has an excellent write up on the difference between "registered voters" and "likely voters". In the interest of accuracy it would be great if some of our esteemed reporters out there would read this.

In the Q-poll Lamont also beats Republican front runners Tom Foley and Mike Fedele by a larger margin than Malloy.

In a very telling trend line of registered Democrats, Lamont actually increased his lead over Malloy since the previous poll. Because both polls used "registered Democrats", it gives a more accurate picture (click on image to enlarge): 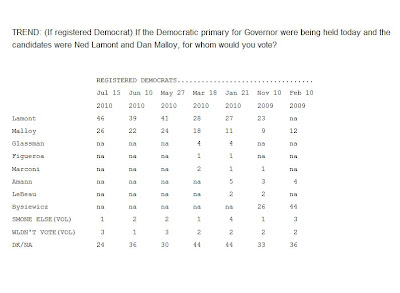 Lamont's lead over Malloy increased from 17 points to 20 points since the June 10th poll. And the June 10th poll was conducted BEFORE the televised June debate between Dan Malloy and Ned Lamont. So Malloy LOST three points after the last debate!

I don't know, but it seems like Dan being so anxious for another debate is a bit of a desperation move, when clearly he wasn't helped at all by the previous debate. Perhaps the voters want to hear about the issues, and not simply more political grandstanding.
Posted by CT Bob at 7/15/2010 08:00:00 AM

Interesting. There is going to be a ton of spin from both camps on this.

I think your analysis is good except for a bit of spin of your own -- Ned's got a 1 point better lead over Foley, which we know isn't significant.

Lamont's camp will probably be reassured and take this poll as indicating no real movement - I suspect you are right and the 9 point lead is probably what its truly been all along among likely voters. But Malloy's people will say this shows momentum in their direction, and I suspect a bunch of lazy newspapers will run with that story based on the topline results alone.

But the only part of this poll that truly matters is that it looks like Gov Tom Foley isn't too likely at this juncture, and I will sleep well with either nominee!

Alex, I agree with you; the diff. between Lamont or Malloy over the Bush-loving wife beater (allegedly) is negligible. Any yes, Malloy's camp is already adding their spin to the numbers, as well they should.

I only wish the MSM weren't so lazy when it comes to analysis! It obviously looks like Dan has gained on Ned, when in fact the numbers can't be accurately compared. But most reporters and editors don't bother to see that; and besides, I'm thinking they'd much rather help this become a close contest than a runaway election.

You said, "..... Lamont's current 9-point lead over Malloy in this poll is more likely reflective of his actual ....."

Or, The gap is closing, and soon will close. Low turnout in primaries makes polling trends more important. Looks bad for Ned.

You really crack me up, Mike.

Here's the real news -- Foley is mopping up on the R side. How much will Malloy be able to raise to match Foley's spending? I know Malloy's camp likes to spin it as class warfare, but it is what it is. Talk to Rob Simmons about his non-fight with Linda McMahon if you want to know what it's like to simply be left in the spending dust.

Do I wish it were different? Sure. But we need to look at reality here. Particularly with the legal mess the CEP is in, you don't want to go into the fall elections at a significant disadvantage.

Mike, if the gap among likely voters in the Q poll is closing, can you please supply me with the prior likely voter data you are using to draw this conclusion?

You can't, because it doesn't exist.

Bob's point is that if Quinnipiac had polled likely voters last month, Ned's lead probably would have been 8 or 9 points then too.

To help you understand why, please read this slowly: There is no polling trend for likely voters in this poll, because this is the first time Quinnipiac has polled likely voters for this race.

You can't compare a poll of likely voters to a poll of registered voters and say "the gap is closing." Unless you're being stupid on purpose.

Beau, are you saying that Mike Brown occasionally acts in a deliberately obtuse manner?

Actually, he does it all the time! (grin)

spazeboy. Don't like the "stupid" comment so I don't feel like responding to you. I will say trends matter more in a low turnout races. Lest we forget. http://www.fivethirtyeight.com/2010/01/538-model-posits-brown-as-31-favorite.html

I don't contest your point about the importance of trends. Only the existence of a trend in the likely voter data.

If you want to look at the trend that exists -- the one in the registered voter data -- you'll see that it's not moving in a way that's favorable for Dan.

Ned is y candidate and i will cast my vote for him But if Malloy wins I a backing hi 100% WE NEED A DEM GOV.

From January to March, the trend was towards Malloy.

From March through July, the trend has been towards Lamont.

In March, Malloy needed 73% of the undecideds to break his way to win. Now, he needs over 90% of them.

It would appear to me that the Malloy campaign's fundamental premise is that people are very bad at math.

Guess we are all looking at different trends. Can't wait for the points to be moot. Dem Governor is the ultimate goal.

"Dem Governor is the ultimate goal."

Agreed. And that's the best news out of this Q-Poll -- either Dem would beat any of the Republican candidates handily.