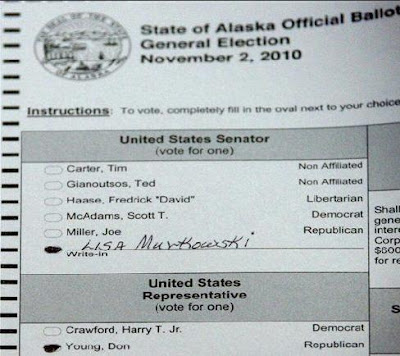 Alaskan senate loser and Tea Party favorite Joe Miller is upset that not enough people in the state love him. Upset enough to file a lawsuit against the state division of elections to prevent them from counting votes where the write-in candidate's name was incorrectly spelled.

Senator Lisa Murkowski was defeated by a raucous Tea Party campaign in the Republican primary, but she decided to run as a write-in candidate, and is expected to win once all the write-in votes are counted.

Unless Miller's lawsuit, which contests every vote that isn't spelled exactly as "Murkowski" or "Lisa Murkowski", is upheld. A judge refused today to exempt minor spelling errors when the vote intent is reasonably clear. From the Anchorage Daily News:

(Judge) Fenumiai overruled the Miller campaign's challenges on ballots like those spelled "Merkowski," "Murkowsky," and "Murcowski." They'll be reviewed in the expected recount, if not the courts.

Miller campaign observers successfully challenged only 1.44 percent of the 19,203 ballots counted on Wednesday. Fenumiai agreed with challenges by the Miller campaign of ballots like "McCosky," "Misskowski" and "Morcowski."

Now, I don't know if the Murkowski campaign ran any advertising on how to spell her last name, which, let's face it, is more difficult to spell than a simpleton's name like "Miller" (just a random example here).

Why didn't they run ads saying something like "Write in Murkowski on Nov. 2nd...that's MUR KOW SKI...M-U-R, K-O-W, S-K-I". That might have brought down the number of contested ballots from almost 10% to probably less than 5%. Then you're not giving a tea bagger anything to hang a lawsuit upon. Miller needs about 12% of the write-ins tossed to have a chance at winning.

Anyway, since there's absolutely no chance that the concept of "fair play" is included in the "Tea Bagger's Guide To Eletions", so you can look forward to a ridiculously drawn-out count, recount, lawsuit, appeal to the Supreme Court, etc. before this is over.

But in the end, "Mur-Kow-Ski" will prevail.

I think a lesson learned here would be to give your candidate an easy to spell "stage name." Something like "Oats." Well, err, maybe that's not the winning strategry either...

And Bob? You're not really rooting for a republican, you're rooting for fairness and sanity. which is ,of course, is mutually exclusive.

Murkowski's campaign focused heavily on the spelling of her name (and filling in the oval). One of her ads was even called "Spelling Bee."

Makes sense. I remember Lieberman's awful ads showing Republicans where on the ballot they needed to fill in to give him six more years, ignoring their own rightfully nominated candidate.

This is a problem I've had to deal with DIRECTLY as an election official since 2004 (full disclosure: I have been the Head Moderator for West Haven since 2008; and have had to perform these duties in persona incognito beforehand in that town since 1998).

The current federal standard is simple: the intent of the voter is the only rule we as election official can apply. West Haven had one hand-counted ballot contested (out of some 14,000 cast, and about 170 hand-counted).

You do the math... How much of a price should the State of Connecticut pay to ensure Bob Adams or Doug Hageman has his vote count.

In short, since elections are now so expensive, how much are elections worth? If we won't pay to run our elections, why should we complain that private corporations buy the elections for us? And thus why should anyone bitch that government doesn't work for them?

"How much does it cost? I'll buy it" - with apologies to Jonathan Edwards