Will work for nothing 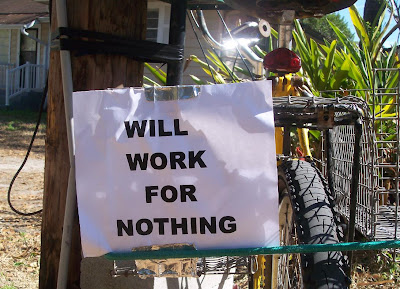 (photo R. Bootooz Delvento)
This is a guest post by my brother Rich. He has limited access to the Internet, but that doesn't preclude him from having strong opinions. Here's the first of what I hope are periodic blog posts:

Why work for nothing? Well, if I do, those in power won't get paid for the bad service we have been provided. If I give bad service, I'm expected to make good on it or return the funds.

I see a man. President Obama. Who talked the talk and who is walking the walk. Thank you Mr. President. Good for you.

As for those who oppose him, they need to get a clue. My education consists of grade school and a G.E.D. Now, it doesn't take a rocket scientist to see that those from the party that was in power (The GOP) messed things up for the rest of us and continue to feed us the same ol' spin.

First and foremost, the repeated claim that we have a Black President is wrong. President Obama is mixed culture. This is proof that racism is a labeling game used by those who would confuse and give false hope.

The revolution that I refer to is one where We, The People have become intolerant of this spin. Not a revolution of armed conflict, but one of quiet courage.

Courage to say "That Is Enough" and DEMAND you make good on the bad service we have received for years. We vote again in two years. So think about it. For, in the words of a man we all know, you could hear these words..."You're Fired!"