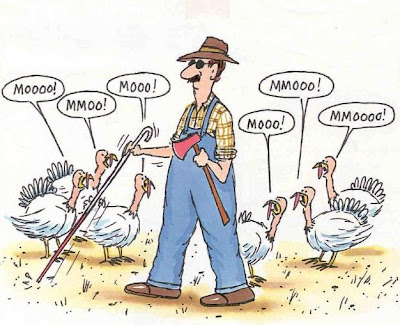 Happy Thanksgiving, Bob.
The farmer in the cartoon must like moo-ed music.
oldswede

On NPR this evening Garrison Keillor devoted his short "Writer's Almanac" spot to Thanksgiving, and I was amazed that he contradicted the "Official Story" that I have been taught all my life. Who knew that Squanto and Massasoit already knew English from their interactions with even earlier Englishmen?

Among other revelations, he says that they all had Venison, Duck, and Lobster. But probably no Turkey...

I had pork chops at an awesome German place in downtown Springfield, MA called Student Prince. You gotta see their collection of beer steins and meerschaum pipes sometime.

And I'm thankful for your blog and also letting me comment here. I know that my POV is sometimes pretty far out there, but I call it like I see it.

May the Great Spirit smile upon you Captain, and fill your sails with a steady wind and following seas, .

If you've ever been up on Cape Cod, in Eastham, you may have noticed a place called First Encounter Beach. This is where the Pilgrims met the local people for the first time. The Pilgrims were foraging and had already stolen corn left as offerings in a graveyard. This first encounter ended with the Pilgrims firing on the residents and fleeing to another part of the coast.
They don't teach this part in school, much.
oldswede

Guess what, oldswede, I will be at the "First Encounter Coffiehouse" in Eastham tomorrow evening for a concert. It's in a small church not far from there, and there will likely be a few Mashpee Wampanoag folks attending. I will tell them about you...

My dad lies in the white man's graveyard behind the Dennis Union Church, and a mile farther east along 6A is the ancient burial ground on the shore of Scargo Lake. From where I'm sitting writing this right now I could easily walk to either place and do so regularly when I'm on-Cape...

And, I have a small powerboat I restored recently that is named "Weetamoe." She was made of riveted aluminum back in the '50's with beautiful classic lines and a mahogany dashboard that I've varnished so deeply that if you put your face right up to it, it's like looking into another world... When I found her, she'd been sitting in a self-storage lot up in Brockton for so long that foot-tall weeds were growing up out of the inches of mud in her bilge. But her previous owner, an aged Navy Seal, loved her so that he paid $95 a month to keep her there although he was too ill to ever go there. She lay there for 7 years until his son sold her to me for one month's storage fee. Here's a web page about the beautiful and powerful "queen." She drowned near Mattapoisset trying to escape the Puritans:

Just one last Turkey day item:
Add eels to the Pilgrim' actual feast menu.
This article in the NYT explains:
Give Thanks for ... Eel?
oldswede

>>This is where the Pilgrims met the local people for the first time. The Pilgrims were foraging and had already stolen corn left as offerings in a graveyard. This first encounter ended with the Pilgrims firing on the residents and fleeing to another part of the coast.
They don't teach this part in school, much.
oldswede

You totally slaughtered anything even vaguely resembling fact in the above.

10 to 1 you think the Mayflower carried a boatload of Puritans too.

Sorry, ACR, but this is the story that is told in the writings of the Pilgrims themselves.
Go read the history. It's all out there.
oldswede

>>Go read the history. It's all out there.

That is not what Bradford wrote.

They had stumbled on to a deserted campsite near what is now Provincetown during their time there as they waited for the storm to end in the hope to sail south around the Cape.

That was a couple days prior, not at 1st Encounter.

"Eastham is one of the first pages in American history. First Encounter Beach is the site of the first meeting between the Pilgrims and the American Indians. In 1620, a small band of Pilgrims, from the Mayflower, was led by Miles Standish on a hunting expedition. The Indians, recalling kidnappings by early English slave traders, sent a warning of arrows, which was answered by musket fire before each party fled."
From the Eastman Chamber of Commerce
More from Bradford and Edward Winslow via CapeCodToday. This is a portion of the text. There is more describing how the Pilgrims thanked the lord for this victory:
"He stood three shots of a musket. At length one took, as he said, full aim at him, and after which he gave extraordinary cry and away they all went. We followed them about a quarter of a mile, but we left six to keep our shallop, for we were careful about our business. Then we shouted all together two several times, and shot off a couple of muskets and so returned; this we did that they might see we were not afraid of them nor discouraged."
There is the usual annual noise in the rightwing echo chamber about the Pilgrims and socialism lately. The facts are that they survived because they were effectively put on welfare by the tribe they encountered in Plymouth. Squanto was their case worker and they were supplied with food and job training until they were able to fend for themselves.
oldswede

I'm patiently waiting for ACR to man up and admit that he's confused and to apologize sincerely for his baseless insults.
Probably a waste of time, since the modern gopper will try to bully and sneer through errors. The problem for him here is ambiguity, the downfall of most righties.
Bradford was a Puritan, yes, but he was also on the Mayflower. This kind of duality is beyond the new conservative mind.
oldswede

You're dealing from an old tired deck.

Here ya go - try some facts:

Mayflower Separatists were not Puritans

Then from another source:
Pilgrims not Puritans