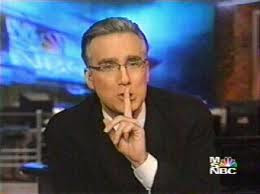 That legendary bastion of the so-called "liberal media", MSNBC, has suspended Keith Olbermann for making some contributions (as a private citizen) to three Democratic candidates this election cycle.

At the same time, several conservative talking heads on the network, including Joe Scarborough and Pat Buchanan, have similarly donated to Republican causes, but strangely enough they're allowed to continue broadcasting. The network is saying KO is a reporter, while Joe and Pat are commentators.

But really, does ANYONE tuning in to watch Keith Olbermann honestly think he's anything but what he is? Can we just try to give TV viewers even the slightest credit for being intelligent?

(Actually, judging from the popularity of "Two and a Half Men", the answer is obviously "no".)

Vermont Sen. Bernie Sanders came out with the following statement:

"It is outrageous that General Electric/MSNBC would suspend Keith Olbermann for exercising his constitutional rights to contribute to a candidate of his choice. This is a real threat to political discourse in America and will have a chilling impact on every commentator for MSNBC."

BTW, FoxNews superstars Karl Rove and Sean Hannity have similarly contributed butt-loads of cash to Republican candidates and causes. And Rupert Murdoch effectively encourages them to do so.

(Hey, at least the guy has a second career option!)

I liked your snark about the Murdoch empire; they give a million to the republican side and then basically say "you don't like it? suck on this!"

And how about that news the other day about Tim Geithner going to meet with Jon Liebowitz (Stuart is only his stage name) last April? Who knew that his older brother is COO of the New York Stock Exchange? Kinda destroys his credibility in my book. We had his producer hauled away in handcuffs not long ago (NYC WeAreChange). Here's the coverage with the youtube:

Olbermann deserved to be suspended.

But I won't hold my breath waiting for MSNBC's opposite number to do the same.

It just shows everyone that liberals hold themselves to the standards they preach.

Unlike the Republicans, who mouth "fiscal responsibility" to get elected and -- even before they take office, start talking about increasing the deficit.

Rachel Maddow's comments about MSNBC v. Fox News point out that there is a very big difference between the two and that they are not mirror images:
On cable news and cable not-news
Media Matters has a good piece on how many of the potential Republican presidential candidates now work for Fox:
The GOP Civil War Will Be Televised
oldswede