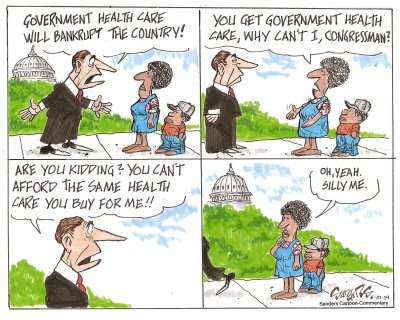 (via Bill Sanders)
If you're going to be against health care, then you should give up your government provided health care yourselves, Congressional Democrats said yesterday.

“You cannot enroll in the very kind of coverage that you want for yourselves, and then turn around and deny it to Americans who don't happen to be Members of Congress," wrote Rep. Joe Crowley (D-NY). “If your conference wants to deny millions of Americans affordable health care, your members should walk that walk.”

The boundless hypocrisy of the GOP will doubtless be proven once again, as they'll likely find some bullshit excuse why they should benefit from the very best health care taxpayers can pay for, while proposing to deny even a minimal amount of coverage to the legions of poor, ill-informed saps who were frightened enough by conservative corporate propaganda into voting for them.

I doubt there's even ONE single millionaire Republican that will have the guts to take up the Democrats' challenge. It's simply too good a deal to pass up, and I never saw a Republican who has ever passed up a chance to effectively make money off the backs of taxpayers.

So, as we head into the new Congressional session, remember while every Republican rails against the health care bill and tries to get it overturned, that not a one of those guys will ever have to worry about paying a single thin dime for their own health insurance!

All that leaf dust, I guess.

God, I wish we could have gotten Big Pharma under control. It's so hard to take them seriously after having seen Michael Moore's "Sicko."

Ironically, I'm about to run out of my blood pressure meds, and I have no job or any kind of coverage right now.

Your situation is shared by literally millions in our nation. It's a disgrace.

>>Ironically, I'm about to run out of my blood pressure meds, and I have no job or any kind of coverage right now.

Sad but true story- A few years back a friend of mine's father got sick with something serious, but I don't know the details of what it was. He was a successful man and lived comfortably in a wealthy neighborhood of Newtown. I believe he owned the business.

One day he went out behind the garden shed and shot himself in the head with his pistol and died there. Now, I'm just speculating, but I have a good idea that he did that to himself to spare his loved ones from having the family wealth drain away for his care, and his widow still lives comfortably in the home.

With a system like other countries such as France has, that probably would not have happened.

Or he was just engaging in self-euthanasia to possibly spare himself the agony of a terminal illness? Which I believe is a right that any person of sound mind should be allowed.

And if he was in France, he probably would have already died from second-hand smoke, because those guys love their unfiltered foreign ciggies.

ACR, do you have no health plan at all? If not, what do you do if you get sick?