Voting on the WFP line

Voted around 9AM this morning at West Shore in Milford. By that time nearly 400 votes had been cast. Looks like we'll have a decent to good turnout this year, maybe approaching the 60% that Susan Bysiewicz predicted.

The opposition plastered the area with their lawn signs, while you had to search for the occasional Democratic sign. I offered to set my lawn signs there last night, but I was told to bring them to HQ for redistribution. I wonder where they ended up. 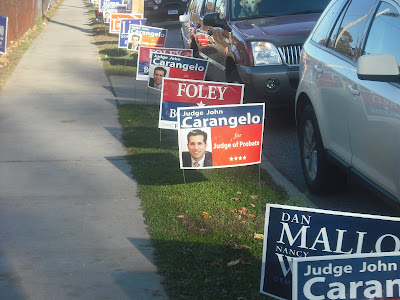 For the first time ever I voted on the Working Families Party line. It's important to keep this ballot line alive, and the best way to do that is to vote on the line for any Democrat who appears on this line. The vote still counts towards your candidate, and then in future elections the Democrats will have better visibility on the ballot.

Remember 10 years ago when thousands of confused elderly voters cast their votes for Pat Buchanan in Florida and put George Bush in the White House? This is why ballot exposure is so important. 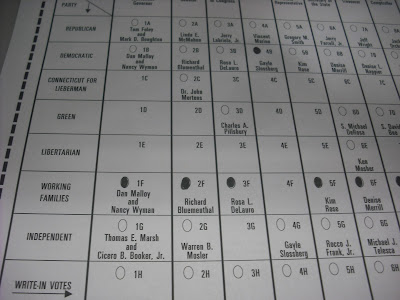 So be sure to vote on the Working Families line for your favorite candidates. Unless they're Republican. THEN, simply vote for the Democrat opposing them.

I voted around 7:45 this morning at Harborside School. Couldn't believe the turnout. There were people waiting in line. Not sure if I've ever seen so many folks there. Not sure what it means though.

I know that we "re-distributed" all of our lawn signs there last night. The signage looked pretty even although I am dubious as to what sort of impact signs have anyway.

Yeah, I know it's not typically a game changer. But it just annoys me a little to see so many GOPer signs all over the place.

Turnout is gonna be big today, maybe huge. Susan B. might hit or exceed her 60% prediction here in CT.