We are close to becoming Florida 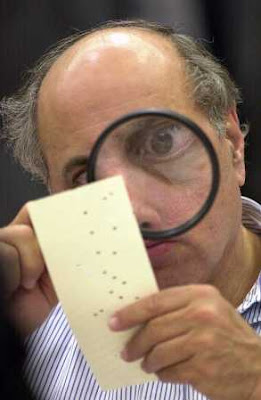 OK, it's starting to look grim for everyone involved. We still don't have a consensus on who won the governor's seat, and overnight the Associated Press has withdrawn their position that Dan Malloy was the winner.

Tom Foley is refusing to concede, there are legions of lawyers standing by to file their objections, and for some reason we can't get accurate numbers on the total vote.

This is starting to look like Florida after the 2000 election. What's gonna happen next? Are we going to witness a "Brooks Brothers riot"?

Sec. of State Susan Bysiewicz stated that Dan Malloy had a 3,103 vote lead with just 1.5% of precincts unreported at her press conference yesterday, but the AP is now saying that Tom Foley is ahead by 8,424 votes. What is the cause of this difference, and why is it taking so long to get accurate numbers? Or at least, if there are specific precincts that still are uncounted, which ones are they, and how many votes do they represent?

Meanwhile, both candidates announced they're putting together transition teams, as detailed in CT News Junkie. I'm sure there will be more news later today.

UPDATE: Daniel Nicholson over at Campaign Diaries has a clear explanation of the discrepancies, especially when looking at the New Haven numbers, which the AP have gotten totally wrong. Susan Bysiewicz may be closer to the actual number as this thing progresses.
Posted by CT Bob at 11/04/2010 08:15:00 AM

It wouldn't surprise me if Malloy did indeed win. As one of the few R's in CT this would be disappointing since Malloy signaled that he wouldn't be averse to raising taxes. Some of the 'evil rich' may just move out of state or retire to Florida early.

Based on the coziness with her pals on WNPR (they don't hide their left tendency very well), it seems apparent that Susan is a good team player for the D's on this one. I suppose that this is natural. The question is, can she weather the storm arising from the backlash and Susan Harris flashbacks.

I don't know. I didn't have a good feeling when Susan announced an "unofficial" winner. Her job is to count the votes fully and then declare an "official" winner. To do otherwise is inviting criticism and charges of being partisan.

There will be a great many lessons to be learned from this election.