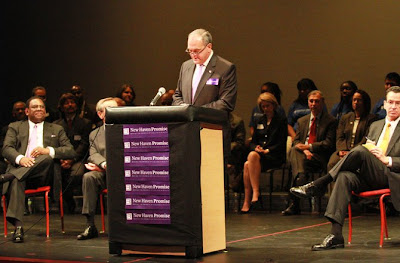 (Photo by Sarah Sullivan/Yale Daily News)
Yesterday Mayor John DeStefano and the City of New Haven unveiled a program that would give students the opportunity to attend college for free.

New Haven Promise is the result of cooperation between the City, Yale University, and the Community Foundation. A total of $4,000,000 is available from Yale, which will be used to provide free tuition to state schools for students who carry a minimum 3.0 GPA (B average), live in New Haven, maintain a 90% attendance rate while staying out of trouble, and perform 40 hours of community service.

This is exactly the sort of forward thinking program that other cities have adopted and shown to be a success. It rewards students who actually want to learn, and gives them a huge incentive to work hard and form long-term goals. Before, without the likelihood of being able to pay for college, many students didn't work as hard and some would drop out the moment a low paying job became available to them.

From the NH Register:

For those who qualify, the city will provide full tuition for up to four years at a Connecticut public university or community college. For students who enroll in nonprofit private universities in the state, including Yale, the city will contribute up to $2,500 per year toward the cost of education. The amount of the scholarship is based on length of time in the district.

The Promise program will be phased in over four years, with this year’s class of 2011 eligible for 25 percent, the class of 2012 eligible for half, and 2013 eligible for 75 percent. Graduates in 2014 will be the first to be eligible for the full benefit. Students must maintain a 2.5 grade point average in college.

This program instills hope and a sense of purpose to city children, and as Mayor De Stefano remarked, the program will build a local workforce, encourage business growth, and add taxpayers to the city.

What a great program
GE should do it for Bridgeport

Sacred Heart doesn't have the endowment that Yale has. This was done in Michigan with great results. I believe it was done in Kalamazoo. http://en.wikipedia.org/wiki/Kalamazoo_Promise I hope Yale will be equally if not more successful in this endeavor.

True; SH doesn't have near the money Yale does. I can't think of any uni in Bpt. that even comes close. It would certainly be good to see someone step up.