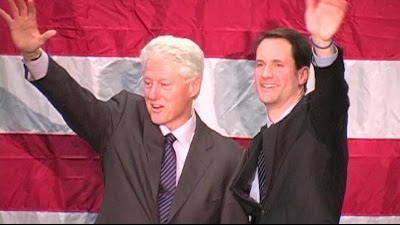 Late last night President Bill Clinton spoke at a Norwalk rally in support of Jim Himes and all the Connecticut Democrats. I was a bit shocked at how much love Democrats still have for Bill Clinton. Watching him working the crowd after his speech was incredible. The man is a living and breathing legend among blue-staters.

President Clinton's speech was amazing and totally on-message. If the Democrats had managed to convey their positions as clearly as Clinton did last night, they'd be picking up seats tomorrow instead of worrying about maybe hanging onto a majority by a slim margin.

I'll have his entire speech online later today. It's a shame every voter won't watch this speech before going to the polls tomorrow. We'd likely have a very different story to tell on Wednesday.
Posted by CT Bob at 11/01/2010 08:38:00 AM

It's great that you do this - I'm looking forward to the full speech!

Thanks. It'll be online around 3PM.

Comment about "Thieficella" was deleted due to him being an annoying pissant!