AFL-CIO endorses Lieberman, but only as a Dem

Today the Connecticut AFL-CIO state political convention voted to endorse Sen. Joe Lieberman, but only until the August 8th primary. In effect, this means the union will likely support the Democratic winner of the primary, whether it's Lieberman or challenger Ned Lamont. 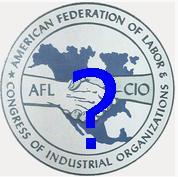 This is a huge blow to the Senator's efforts should he decide to flee the Democrats and run as an Independent in November.

Paul Bass wrote today in the New Haven Independent (and yes, the irony of that name isn't lost on me!):

As recently as yesterday, state AFL-CIO President Olsen said he expected the organization to endorse Lieberman not just in his primary against challenger Ned Lamont, but in the general election, too – even if Lieberman loses the primary and runs as an independent.

That changed in the hours before the federation voted Tuesday afternoon. At a lunch meeting of the organization’s Committee on Political Education, delegates from the machinists, teachers and auto workers’ unions, who support Lamont, convinced the group to change its mind and limit the endorsement to the primary.

When it came for the voice vote in the Omni ballroom, the “aye”s to endorse Lieberman rang loud and clear. But so did the no votes.

The decision to limit the endorsement to the primary represents a victory of sorts for Lamont’s challenge to the three-term incumbent. It leaves open the option that the federation could support Lamont in November against an independent Lieberman candidacy.

You are an inerudite troglodyte, and your analysis is superficial and incomplete. I would recommend actually blogging instead of just copying down news that we all can read elsewhere. If you aren't going to offer any worthwhile insight, it isn't worth my time to read this blog.

I don't think Bob will lose one second of sleep losing you as a reader.

Wow! I managed to annoy "tom" enough for him to go and access Thesaurus.com to find some seldom-used words to insult me.

I'm honored, but don't strain yourself. Keep reading "Connecticut Bob", tom; I know you love it!

In fact, I already knew those words and did not need to go to the thesaurus. Apparently you, however, did need to look up the words. Just one small indication of who is the ignorant one and who is the enlightened one. Funny, isn't it, that the ignorant one is the liberal...

Nobody can resist the awesomeness of "Connecticut Bob"!

Is there a synonym for douchebag in your thesaurus, Bob? I don't want to lower the level of discourse here, which is why I'm fishing for a fancy word. Can you help me out?

Let me spell it for you, Spazeboy:

Hey, after 30,000+ visits, do you realize that was my first troll? For a while I thought I was doing something wrong! Sheesh.

So petty Tom. Go back to smoking your cigarette and fill your lungs with that noxious smoke.

^ Looks likes a liberal is trying to impersonate my username, probably because instead of debating with facts liberals choose to debate with unsubstantiated flimsy claims. But anyway...

Bob, you are so very petty. "Go back to smoking your cigarette and fill your lungs with that noxious smoke."

Hey tom, since you're so petty, then would that make you "tom petty"?

Silly rabbit! I thought this blog wasn't worth your time to read? Seems like you're staying up late to see what I post. Thanks for the hits; every visit is a victory for Libruls like me!

Bob, I am a fan of this blog, so I can't let this pass.
Please notice how a lot of trolls just insult. They never really make any kind of real argument with examples, etc. Writing teachers in grammar school would say . . . oh never mind.
Not to mention, this one understands very little about the nature of blogging & that it is a mix of original material and commentary and other interactive & multimedia goodness.
But who knows maybe "tom" thinks Rethuglican party apparatchnik blogs are original & it's hard to compete with that standard since it demands regurgitation of party dictates or talking points mixed with obscenity. It's hard to know where "tom" is coming from. It could be a rabies epidemic.

I know they never manage to bring a reasonable debate to the table. I just get a kick out of fucking with them. Sorry about feeding the trolls.

They DO have such cute, semi-developed little brains, you know.

...and also, so I hear, small and insignificant genetalia.

Bob, it's totally understandable. And you know the FDL rule is that you're getting to them, if they come by like this. By the way a few posts down, someone posted as "me." That's disturbing. Bizarre and slightly amusing at the same time.