As he detailed in this article in Rolling Stone, Robert F. Kennedy, Jr. explains how the 2004 Presidential Election was stolen by illegal means in Ohio, a critical swing state. 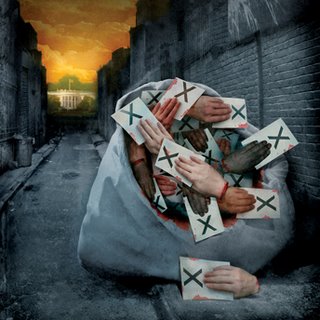 There was little doubt in my mind something was terribly wrong the day after the election; when exit polls in Ohio varied wildly from election results, there were extreme delays at polling places, and the many stories of registered Democrats being turned away from voting booths echoed the 2000 Florida voter disenfranchisement. I was extremely disappointed in John Kerry for conceding so quickly when there were simply so many obvious instances of voting tampering.

But considering John Kerry's ineffectual response to the Republican's "Swift-boating" of him during the campaign, I wasn't too surprised. You have to be decisive and ruthless in national politics these days. Kerry rarely barked and never bit. That's not going to get you the White House when so many pitbulls are roaming around you.

"The reports were especially disturbing in Ohio, the critical battleground state that clinched Bush's victory in the electoral college. Officials there purged tens of thousands of eligible voters from the rolls, neglected to process registration cards generated by Democratic voter drives, shortchanged Democratic precincts when they allocated voting machines and illegally derailed a recount that could have given Kerry the presidency. A precinct in an evangelical church in Miami County recorded an impossibly high turnout of ninety-eight percent, while a polling place in inner-city Cleveland recorded an equally impossible turnout of only seven percent. In Warren County, GOP election officials even invented a nonexistent terrorist threat to bar the media from monitoring the official vote count."

''It was terrible,'' says Sen. Christopher Dodd, who helped craft reforms in 2002 that were supposed to prevent such electoral abuses. ''People waiting in line for twelve hours to cast their ballots, people not being allowed to vote because they were in the wrong precinct -- it was an outrage. In Ohio, you had a secretary of state who was determined to guarantee a Republican outcome. I'm terribly disheartened.''

We all were, believe me.

One of my biggest fears for the future of democracy in America are those electronic voting machines that are hackable and easily reprogrammed. Without some kind of paper record, there is a distinct possibility that a Democrat may never again grace the White House. Our fairly-elected representatives need to greatly expand the 2002 voting reforms, and the Democrats need to file legal challenges (already underway in several states) to prevent the use of those machines.
Posted by CT Bob at 6/02/2006 06:39:00 AM

All right. Fine. Now we have proof of what we knew all along. What are we going to do about it? Are we just going to sit on our hands and allow a intruder in the White House who cheated to get there? Both times (see Greg Palast's book, "The Best Democracy Money Can Buy"). He's clearly illegitimate.

I'm compelled to note that this issue, as in 2000, despite mountains of proof, was not a major media issue. Arf, arf.

You might be right. Our elected officials are the ones who need to act upon this; all we can do is publicize it and raise people's awareness, so they can pressure their representatives.

Keep in mind that in 2000-2003, Bush was fairly untouchable. These days, with an approval rating in the 20's, other lawmakers can read the writing on the wall and make finally break ranks with him.

And by electing true Dems to Congress this November, we can have the majority to finally pursue this thing.

The other option is to give up...and I'm not ready for THAT yet.

No there is more that we can do and that is to exspect them not to play fair.

Kelly is right...cheating is a big part of their strategy and exspecting us to complain and investigate while they get elected makes them LOL...

Phil, that was my biggest criticism of Kerry; he let them repeat the "Swift-boat" thing about a million times without lashing back at Bush for being AWOL during the war, and as a result a bunch of undecided voters started believing it and went with Bush.

Ohio wouldn't have mattered if Kerry had simply reacted like a man should have and fought back early and often; he would have trounced Bush so badly in those close, easily-hijacked states they wouldn't have had a chance to steal the election.

I'm not saying that Democrats should stoop to their tactics in a race, but they should plan for the worst the Republicans can throw at them and not be caught so obviously unprepared.

And the Democrats need to mobilize people in those Republican-run states to show up and poll-watch on election night, with video cameras and tape recorders. The mere sight of a few dedicated volunteers there to tape any possible heavy-handed tactics will serve as a useful deterrent in addition to documenting any wrongdoing.

Hallo I absolutely adore your site. You have beautiful graphics I have ever seen.
»

Very best site. Keep working. Will return in the near future.
»