Welcome to the "Joe-Fly Zone"

Senator Joe Lieberman has been racking up some impressive numbers lately. Since 2000, the junior senator and his staff have amassed a huge amount of luxury travel miles, all paid for by special interests and lobbyists for corporations. Hey, Joe knows comfort...it's gotta be a lot nicer to fly in a $50,000,000 Gulfstream private jet that carries 6 or 8 of your most trusted staffers than a Delta DC-9 filled with sweaty commoners.

By Fred Lucas THE NEWS-TIMES

Imagine all-expense-paid trips to the Bahamas, Ecuador, Europe, China, Las Vegas, even Alaska. They might sound like game show prizes, but they're a perk for some members of Congress, their spouses and staff. 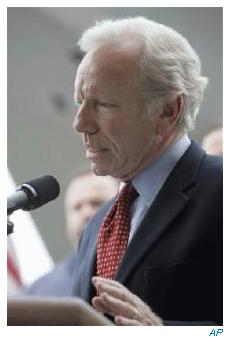 In Connecticut, U.S. Sen. Joseph Lieberman, a Democrat, and U.S. Rep. Nancy Johnson, R-5th Dist., lead the way in jetting on someone else's dime. That is according to a report released this month by the Center for Public Integrity, a Washington-based watchdog group, which covered the period from January 2000 to June 2005.

In all, interest groups spent more than $600,000 on more than 300 trips for Connecticut members of Congress over a 5½-year period.

Lieberman and his staff took 130 trips, more than twice as many as any other member of the Connecticut delegation during the period covered by the report, with private interests footing the $119,000 bill.

Even the Republican challenger for Lieberman's senate seat is perplexed by the amount of privately funded travel the Senator takes for himself and his staff:

"When it comes to the corporate frequent flyer sweepstakes, Joe Lieberman is at the top of the state delegation list," said a statement from the campaign of Republican Alan Schlesinger, who is running for Lieberman's Senate seat.

And the Ned Lamont campaign chimes in on the issue:

"Sen. Lieberman is out of touch with Connecticut because he's spending time with corporations and out-of-state donors," said Liz Dupont-Diehl, spokeswoman for Ned Lamont, who is challenging Lieberman in a Democratic primary.

Clearly, even the Senator himself thinks there is something a little unethical about receiving such generous complimentary gifts from corporations and private interests:

Lieberman has proposed measures to curb privately funded travel by requiring that members pay the difference in the price of a charter flight and a commercial flight, said Lieberman spokeswoman Leslie Phillips.

So, let me understand you, Senator. You want to propose that you pay the difference between the cost of a commercial flight and a private charter, because you think it's wrong to accept such gifts.

Well Senator Lieberman, why don't you put your money where your mouth is and VOLUNTARILY pay up the difference?

He certainly seems to live like a millionaire that Lieberman.