It's official, Lieberman WILL not support the winner of the primary (if he loses)

(again, this is directly from ConnecticutBLOG...you're making my job easy today, CT Blogger!)

Time to whip out the Drudge siren! (Hats off to Neal for catching this clip today. Please recommend his post over at Daily Kos).

In what can only be called an act of utter stupidity, the Lieberman campaign finally shows it true colors to the voters of Connecticut today.

This morning on WSTC/WNLK here in Connecticut, Lieberman campaign manager Sean Smith made it official. He said this to news reporter Erik Campano,

Stories about the new Lamont radio spot are all over the news and blogs this morning. But, it appears that local reporter Campano was the only one to get the Lieberman campaign on the record stating Lieberman's intentions to NOT support the winner of the Democratic primary. Perhaps Sean Smith thinks that no one listens to AM radio anymore?

Is this the type of person you want representing you as senator in Washington?

Does this sound like the type of politican who cares about the will of the Democratic party over himself?

Does this sound like a politician who supports democracy and the will of the people who will vote in the perimary?

Do you need any more evidence to show you that Joe's planning to jump ship?

Look, this goes out to those Democratic Lieberman supporters: How can you support a person who cares more about himself over the will of the Democratic voters in Connecticut?

Joe's camapign just said the very thing we've been saying about Joe from the very beginning...Lieberman is a Democrat in Name Only.

Even Stevie Wonder can see that Joe cares only about himself while Ned Lamont said from the very beginning that he'll support whoever wins the primary. 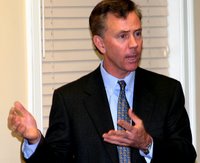