We must be getting under their skin!

Before the advent of the "Internets", I used to picture "trolls" as those delightful little dolls with the spiky hair and cute expressions. Heck, I even had one when I was a young kid back in the '60's. 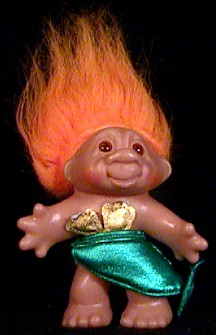 These days, with the interactive medium of the 'net, we usually associate trolls with something else.

Something sad and desperate.

Apparently the Liebertrolls have started responding to us bloggers covering the hotly contested race for the U.S. Senate. They've started showing up on our blogs, spouting pathetic statements in support of their tarnished hero.

Really, it's quite sad to see what I'm assuming to be adults, so desparately trying to stir up some discussion of Ned Lamont's record or his stance on the issues. It's gotta be depressing for them, because any head-to-head comparison of the two candidates on the issues leaves Joe looking like a washed up and out of touch hack.

But really, all you Lamont bloggers out there, don't waste your energy or time engaging these cheerless people in debate. They don't respond, they're disingenuous, and many of them probably aren't even local. Hell, one of them repeatedly spells the word "Connecticut" wrong!

They simply want to distract us from the message. And the message is "Ned Lamont is good for Connecticut, and good for the nation." Let's not get sidetracked from that message. 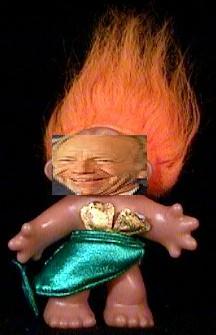 Just ignore the Liebertrolls. They'll eventually get disillusioned with Joe and go away. Or they'll join us in our support of Ned Lamont. Either way, don't engage them. They'll learn someday.

Trolls are a nasty lot. The right wing, Republicans, and DINO's like Lieberman, really churn 'em out. Trolls are a disgusting bunch that never have anything to add in the way of constructive commentary. Some trolls probably get paid and others' only motive seems to be to needle and harass. Good, solid, unoffensive discourse, be it from the right, the left, in between or neither are what is supposed to make democracy work. This kind of debate is most interesting. Trolls are in the business of propanganda, subterfuge and subversion and perversion of facts and the truth. Come to think of it, Lieberman is in the same business. He has been for most of his political life.

True democrats need honest and responsible representation - representation that does not defend the enemy, does not vote against dem interests, and does speak truthfully about votes/actions taken in the past.
I only see one dem candidate in Connecticut who fits that bill in the Senate race. All my best to you, Ned Lamont - an authentic democrat.

I sure hope that Lamont can pull it off. It's become wearisome to the max to have to put up with pale imitations of Democrats. Like La Hil and Lieberman. Also, it would sure be nice if the Democrats would get rid of the DLC. The DLC, now that's a distasteful NAFTA/CAFTA, labor hating group of "progressive" pretenders. Them and their "Third Way" anti-worker, out-sourcing, pro-corporate hypocrites would be better named the Republican Leadership Council.

Thanks Deanfan; I had a lot of fun making that second troll image.

If I may dissent slightly.

I know the official line on trolls is to ignore them, but I'm not sure that's entirely wise with political trolls. Particularly when we know the traditional media is trying to figure out the blogs, and may very well use the trollquotes as legit.

If you can manage a dismissive comment that doesn't engage them, ime, it seems to discourage them.

An offhand challenge to back up their contentions or shut up tends to make them scurry back to their holes until the nanobots can be reprogrammed.

It is better for your blood pressure not to engage them, however, so discretion is adviseable...

I guess by saying "ignore them", I meant you should avoid trying to reason with them. I should have said, "don't engage them, just slam them (with extreme snarkiness if possible) and move on". That's more accurate, I think. When someone repeatedly posts the same ranting message numerous times to multiple blogs, they need a good, public face smashing.

And if you can humiliate them at the same time, well I say "more power to ya"!

(Yes, I tend to not suffer fools gladly.)

I tend to prefer the fools do the suffering.

I'm not being mean when I say that, but if a gentler means of education worked, they wouldn't be such willing tools.

Hopefully, they'll find it instructive. If not, at least I get some amusement out of it...So, okay, maybe I am being a little mean.

But they started it!

Bob, does that definition of trolls include persons who say they are from "real ranching towns in Middlebury". Yeah Middlebury CT? If someone is pretending to be from CT they could at least get the geography and lingo right. Discussed this with a person from N.W. CT. Never ever heard someone call their farm a "ranch" in CT.

Greets to the webmaster of this wonderful site. Keep working. Thank you.
»

Great site loved it alot, will come back and visit again.
»