On Lieberman and Hannity 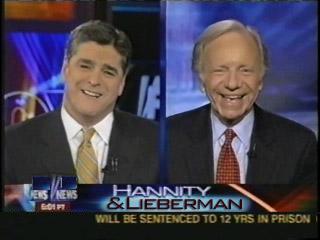 In this article in Political Cortex, Bill Hare examines the connection between Sen. Joe Lieberman and Sean Hannity:

As has been noted, Lieberman has made a recent ally of Fox News right wing Republican commentator Sean Hannity. On one of his recent appearances Lieberman expressed concern that so many in his party do not understand traditional American values. The Fox commentator was only too happy to agree.

Why wouldn't he be? Joe Lieberman is Fox News's perfect idea of a Democrat - deferential to the President, willing to go against his own party to support the conservative agenda, unquestioning about the war.

Just as (Zell) Miller bolted the Democrats for the stated reason that his party left him rather than the other way around, Joseph Lieberman is currently sounding a variation of the same theme. This leads to the obvious question of whether Sean Hannity occupies the ideological ground traditionally familiar to Democrats.

To believe that Hannity occupies traditional Democratic ideological is comparable to accepting the outlandish claim by Bill O'Reilly of the same network that he is a populist and that Fox is actually objective and that the opposite perception from progressives stems from the fact that the other media outlets are strongly allied with the left and that their reportage reveals this trait.

And then there's this little comparison that so far nobody seems to have explored:

Lieberman and Fox News is a predictable team. Lieberman falls into the same pattern as John Connally when he headed the Democrats for Nixon Committee during Richard Nixon's 1972 reelection presidential campaign.

Connally then promptly switched parties following the election with the intention of becoming president as Nixon's heir designate. Watergate got in the way and Connally's chance vanished.

It is no accident that Karl Rove, who idolized Nixon, is a strategy maker during a period when a faux Democrat like Joseph Lieberman links himself to the Republican National Committee's television propaganda arm, Fox News.

The objective is clear. If enough voters can be convinced that "Democrats" of the Lieberman stripe should be preferred over true progressives, the Bush Republicans have succeeded in achieving unilateral disarmament over the American political system.

The article ends with this little entreaty:

"Hopefully Connecticut voters will see through the Lieberman charade. A viable alternative is present. His name is Ned Lamont."
Posted by CT Bob at 6/27/2006 10:07:00 AM