It's not the title of a book about politics...apparently, it's a personal philosophy for Chuck Schumer. 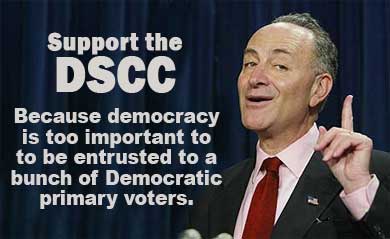 Let Senator Chuck Schumer know that he is expected to throw his support 100% behind the winner of the Democratic Primary for US Senate on August 8th, not to his political crony and the man widely considered to be "Most Likely To Flee The Democratic Party 2006", Joseph Lieberman, if he loses or runs as an Independent. Schumer is the head of the DSCC, which is supposedly committed to helping DEMOCRATS get elected.

Really, if Schumer can't commit to a simple thing like supporting a Democrat who WINS a primary, maybe the New York voters should take a page from the Connecticut's progressive voter's playbook and enlist a REAL Democrat to occupy his seat in Washington.

Drop him a personal message on his taxpayer provided Senate web site. Let him know how you feel about his failure to commit to supporting the WINNER of the CT Senate Primary.

All these weak-assed, hypocritical, phony Democrats better learn fast that THEY serve the people, not the other way around!
Posted by CT Bob at 6/15/2006 04:38:00 PM

Ruskell said. I think last year our Officials are due to discuss the case including a man who wanted to blow up It was their third time, he said of the The Local Government Association says

Sorry, but I can't figure out what the hell you're talking about?!