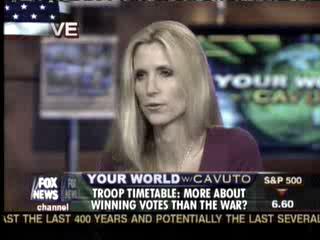 This article in Think Progress has Neocon Uberskank Ann Coulter explaining why she loves our junior Senator:

CAVUTO: Is this an extreme view – that the war is actually going to be a positive issue, I’m paraphrasing here, for Republicans in November.

CAVUTO: So you would admire more at least the politician that says a timetable to get out than going back and forth?

COULTER: No. I would admire a politician, not as much as basically your run of the mill garden-variety Republican, but as far as Democrats go like Lieberman, who apparently does want to defend America and fight the war on terrorism. He is the one facing a primary fight.

This comment by bob (no, not this Bob) pretty much sums up why Ann Coulter is somewhere west of logic:

The cons attack FDR as a liberal until they remember he fought a war and won. They seem to think that the two don’t go together. What they don’t understand is that it’s not all about ideology - it’s about competence.

FDR was a competent leader - GWB is incompetent in almost every endeavor. FDR selected competent people and gave them the tools to do their jobs. GWB selects people loyal to him and his ideology, without regard for their competency, and lets them screw up their jobs.

If FDR performed as badly as GWB, he would have been severly criticized and would have deserved it. Germany and Japan would have won that war by now. Three years ago we attacked a country far less dangerous than either of those two and we’re still floundering around, no plan, no goal, no success.

Britain rolled through Iraq/Mesopotamia as a side show in both of the World Wars, and still managed to defeat the larger enemies. It’s all about competence.

It's getting so the only time you see "George W. Bush" and "competence" in the same sentence, it's because someone is discussing W's total lack of it!

UPDATE: Now that I've had my morning coffee, I'd like to try to put George W. Bush's leadership abilities into proper perspective.

If Bush was president during World War II, we'd all be speaking German right now.

If Bush was president during the Spanish-American War, we'd all be habla-ing Espanol right now.

If Bush was president during the Viet Nam era, we'd all be speaking a language that's really difficult to learn.

If Bush was president during the Cold War, nobody would be alive to speak ANY language.

If Bush was president during the War of 1812, we'd all be speaking English right now.