The impact of citizen videography

I've been made an example of!

Or, more accurately, my work was used AS an example.

Which is good, because in retrospect, someone making an example of me might lead to an uncomfortable conversation about the inherent dangers of cigar smoking, or the need for most Americans to eat healthier and exercise on occasion, or how alcohol consumption is an activity that should be performed in moderation, if at all.

So I was pleased (and not a little relieved) to see this article by Paul Bass in the New Haven Independent covering a seminar on the new Internet-driven media of the 21st century.

Specifically the part where I'm referred to as "one particularly skilled videoblogger..."

Aldon Hynes (pictured). And one of his topics was exhibit A for the instant new influence of grassoots citizen media on social-change politics: the Ned Lamont for Senate campaign. 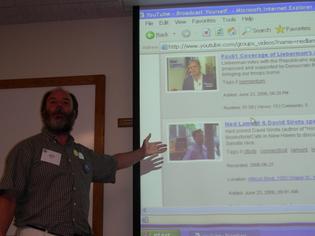 Hynes lives on the web, 16 hours a day. (He does have a wife and a daughter, believe it or not.) Besides blogging and leading conferences, he currently works net-side for Lamont's insurgent challenge to incumbent Sen. Josepeh Lieberman in a Democratic primary. Legions of citizen bloggers have organized support for Lamont, across the country, and developed surprisingly creative and effective homemade vidoes which they exhibit on the web. In the photo, Hynes is showing a video one particularly skilled videoblogger, "CT Bob," made by working with a trailer from "Mr. Smith Goes to Washington." His version is about "Mr. Lamont."

Hynes showed a "Nedheads" section of Youtube where 173 people are producing campaign-related videos, some from TV footage, some from events they shoot live, some from scenes they create themselves.

I've been agnostic about some of the citizen media movement. I think it often sounds better in theory than practice. Most people would rather have a trained, skilled full-time journalist go find out information about their government and police and courts for them while they work at their own jobs all day. But it's become clearer to me that video is an exception. The tools are cheaper, and everyday people are having an impact. Just in the past few months Youtube has become somewhat of a household name and enabled citizen video-producers to reach, at times, millions of people past the filter of corporate media.

To see the video in the example, click on "Mr. Lamont Goes To Washington".