Well, if 24 minutes can be considered "full-length". 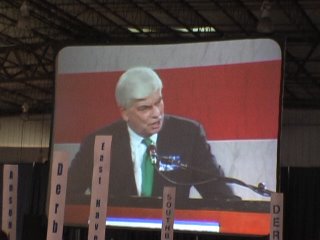 Chris Dodd nominates Joe Lieberman
I put the video together from my four-plus hours of tape, with a lot of hand-held camera footage that I would have left out except there was usually something being announced on the PA system that I wanted to include. Mostly, I tried to convey my personal impressions of the convention rather than a balanced documentary approach, because there was plenty of media there doing "straight reporting". So there's a lot of off-hand remarks and video titles that describe the mood of the event.

It's a big (39MB) file, so give it some time to load if it keeps stopping. Enjoy! And here's the direct link if the image doesn't work http://www.youtube.com/watch?v=uG0Zwl0Wr-k 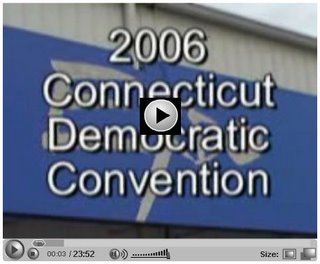 Bob--I'm wondering if you can direct me to a link that would help me get my hands on some Lamont yard signs. I can't find anything at nedlamont.com, but maybe I missed it. I'd appreciate the help.

Fezzik - that's amazing, I was just thinking about yard signs. I didn't realize it was my spidey sense tingling!

I think they'll be available nearer to the election from your local district office. If you can tell me which congressional district or town you live in, I can put you in touch with the local Lamont office.

But I think there are restrictions on how long before an election you can put up yard signs; this is a good thing, or else your crazy neighbor might have a Lieberman sign up year round! I think it's something like not before a couple weeks before the election, and they have to be taken down soon after.