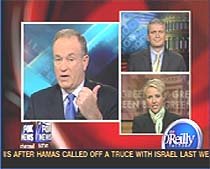 When he's not allegedly sexually harrassing his staff, Mr. O'Reilly is popularly known as a pompous cheerleader for the Bush/Cheney administration and all it's failed and criminal programs. He frequently squawks about the "godless liberals of the Left" while doing unspeakable things to himself in the privacy of his own home.

In case you haven't heard about it, check out "The Smoking Gun's" compelling article about O'Reilly's wanton sexual harrassment and perverted phone conversations.

And I'm sure those acts are well documented by the tireless and vigilant agents of the National Security Agency (or the "NSA", as it's commonly called). Boy, I'd love to hear some of their secret tapes starring O'Reilly.

(rough transcript-you can see the rest)

O'Reilly: Let me answer my own question. I think George Soros, Peter Lewis, Moveon, all of these people-these far left fringe people want a completely different America--They got the bucks! They got the money! And now with the internet, they got the smear machine. You don't play their game-you don't get any money and you get smeared. Look what's going on with Lieberman in CT. They're after Lieberman, their own Democrats are after him.

Sammon: So people like Lieberman are getting squeezed out and he's thinking about running as an Independent now because there's no room for him in the moderate Democratic Party...

O'Reilly: He shouldn't. He'll win on the Democratic ticket in CT.

Check out the entire video on Crooks and Liars.

Oh, and Joe? If I were you, I'd forget about an endorsement from Sean Hannity. You really pissed him off by lying about going on his crappy show every single month. Way to screw your friends, Joe.
Posted by CT Bob at 6/16/2006 09:16:00 AM

That is not a good endorsement: Lieberman, Bill (O' Falafel) O'Reilly's favorite Democrat.
I the way O'Reilly tries to connect the CT primary and George Soros. As if!