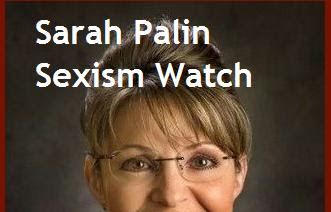 Recently I came across something interesting while I was googling Sarah Palin.

(Gee, upon rereading that, it sounds kind of suggestive, eh? Oh well, I'm off to a bad start already.)

Anyway, it's the "Sarah Palin Sexism Watch" (SPSW), a blog whose stated purpose is:

"...to monitor, and round up, the sexist treatment given to Republican VP nominee, Sarah Palin. This blog will focus on sexist reactions to the Palin nomination by the media and politicians."

That, in and of itself, is an admirable goal. We all know that sexism has no place in politics; or indeed, anywhere in our culture. So this blog showcases instances and quotes of real (or in some cases, perceived) sexism. 245 posts so far this month. That's some kind of volume they got going there!

When I looked through the blog, I did find valid examples of blatant sexism in the media and by public figures. However, there are also many instances of reasonable criticism that are labeled "sexist", when they would equally apply to a male politician. Just as there is a need to watch for sexism in writings about Gov. Palin, we also need to call out people who use the VP candidate's gender as an excuse to attack the left or the media and label them sexist.

And some examples are downright weird. I find it ironic that the moderator of the blog puts up verbatim quotes of what she considers sexist, and yet by repeating the quotes she is guilty of expanding their reach. For instance, I had absolutely no idea what Margaret Cho (the comic) wants to do with Ms. Palin's undercarriage until I read about it in SPSW. For someone who claims that Cho's monologue is "rhetorical rape", I was a little surprised to see the entire screed posted on her blog, thereby subjecting Ms. Palin again to this supposed trauma.

Another recent instance is when they claimed sexism by the SNL skit that referenced possible incest in the Palin family, and yet they included a Youtube clip of the sketch, albeit taken out of context; you couldn't tell that the press conference was supposedly for the NY Times and the clip was only a small part of it. They also have a link to a website that sells T-Shirts with Palin's face on in and the word "RepubliC*nt" written below it. (While I prefer there be no words off-limits on this blog, that's one of the very few I won't type. Regardless, I have a feeling this article won't be selected for the Hartford Courant this week.) They also link to a website where you can get a T-shirt that says "I'm the guy Sarah Palin blew to get the nomination".

When I questioned the blog owner about the GOP's vociferous sexism that Hillary Clinton endured for the last 18 years, she replied that because Clinton was no longer running she wouldn't address it. I guess during all those years of blatant, over-the-top sexist attacks on Hillary, Ms. Moderator sat on her hands and quietly seethed over it. Apparently she wasn't quite moved enough to actually write anything in Hillary's defense.

But when the GOP's "Golden Girl" suddenly burst onto the scene from total obscurity less than a month ago, this transparently partisan blog emerged from the primordial ooze of the conservative movement like a prehistoric amphibian taking it's first shaky steps onto land.

Oops, I forgot; Ms. Palin is a Creationist. She thinks the Earth is only 6,000 years old and Evolution shouldn't be taught in schools. Sorry about that blatantly sexist metaphor.

Anyway, I confess that I get a laugh out of stuff like a PBS poll asking if Palin is qualified to be VP being labeled "sexist" by the blog. The excessive number of ambiguous or downright WRONG accusations diminishes what should be a clear message against sexism. And if they included examples of women in other parties who have been treated badly, like perhaps, I dunno, maybe Hillary, then their blog might carry more influence on the dialog.

Sadly, it's obviously just another way for the GOP to launch partisan attacks on the media and the Left. I just wish they were more honest about it. I'd respect that. Anyway, they've earned a place on my list of "Distinguished Adversaries" links on the sidebar. And they gave me fodder for another blog post.

Re: Pennsylvania lost. Joe Biden just did that a little while ago with an anti coal rant. Way to go Joe. Could Joe be going bye bye soon? Stay tuned! While the nutroots obsesses with Palin, Ole Joe is sure P***ing Obama off.

You can say "pissing" here. We're not children, you know.

Believe it or not, more voters actually want to see SMART energy policies that will leave a habitable world for future generations to inherent.