Judging from the wailing and gnashing of teeth that we're hearing from WingNuttia (a magical land, where everyone has guns and practices a suitably acceptable variety of one of the many Christian religions) you would think that poor helpless moose executioner Sarah Palin was abducted by crazed leftist radicals and forced to watch "Fahrenheit 9/11" repeatedly while strapped into a chair with her eyelids forced open like Malcolm McDowell in the torture scene from "A Clockwork Orange"! 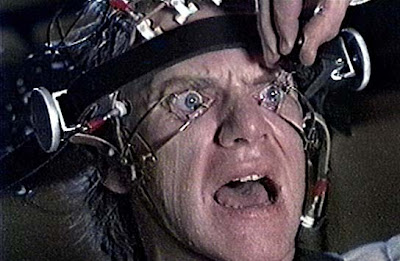 What's causing the Republicans to currently get their panties all twisted into a bunch is the fact that Barack Obama used the very same term describing Palin's record that John Sidney McCain used to describe Hillary Clinton at some earlier time. 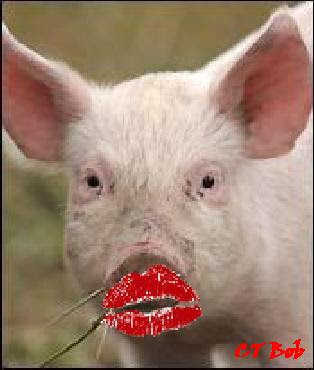 Democratic Congressman Russ Carnahan on Tuesday – introducing Joe Biden at a campaign event – ripped into Palin’s record and punctuated it with this snarky jab. “There’s no way you can dress up that record, even with a lot of lipstick,” he said. Later in the day, Obama used a variation of the lipstick line, though he was clearly talking about the McCain-Palin reform rhetoric. "You can put lipstick on a pig," he said. "It's still a pig."

Republicans everywhere are swooning dramatically and clutching at the curtains to keep themselves from falling over!

They're saying: "How DARE those treacherous Democrats somehow through our painfully tortured logic compare our Blessed Virgin Mary reincarnate, Sarah Palin, to an ANIMAL???" 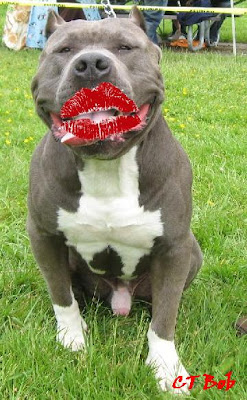 Lest anyone forget, this is the image that Saint Sarah herself brought to mind during her teleprompter'd speech last week.

Lets not forget how he called McCain an "old fish". So Obama managed to "inadvertently" stumble across the "oldness" descriptor of McCain he loves so much and the "lipstick" reference Palin used. Is Obama really that unlucky to have used both by accident?

I do like the pitbull picture though - but maybe you could have taken the extra second to crop the penis out before adding the lipstick. Just sayin...

Did you notice the diary over at the Bomman Tribune where BooMan pointed to one of your posts on Lieberman and calling it:

Just thought you should know...

OOPS! That should say "Booman Tribune"

A great discussion of the lipstick issue on another CT blog. with a link to McCain's use of the phrase:
here.

anon - Don't say "penis" on my blog! Children might see it!

Actually, I didn't even notice it until I was done because the penis in question was off the bottom of my screen while I was editing the lipstick part; when I finished and saw it, I figured nobody would notice or care. You proved me wrong. LOL!

CM1, yeah I saw the Booman thing; I even got a bunch of hits from there via the link he put in. I should probably acknowledge it in an article.

Or could it be...they looked at your "dog", Bob, & feel somwhow inadequate???

I have a couple of responses that for reasons of taste I'll not post here.

But trust me, they were VERY funny!

Nate Silver, commenting on www.fivethirtyeight.com, has an interesting posting on this. He says that his first take on Obama's remark was that it was "a deliberate attempt to provoke exactly the sort of fanatical reaction that they have gotten from the Republicans." It knocked down McCain's post-convention momentum and dropped him right into the mud.
Obama can now redefine the McCain campaign, as he seems to be doing, "as distractions, not solutions."
Some key parts of the MSM seem to be getting on board with this.
See the original site for more.
oldswede

woah.. dude, that pit bull has some big balls.. now excuse me while i gouge my eyes out