One Child Left Behind

And that child would be Ramesh Ponnuru, a contributor to the National Review Online. Apparently this mathematical genius reported that the quaint little backwater of Wasilla, Alaska has a LARGER population than the entire state of Delaware. Besides the obvious mistake, the implication is that a candidate who holds office over a larger population is a better legislator.

Following that rational, the conservative publication absolutely must be supporting Barack Obama over John Sidney McCain, because the population of Illinois is 42,000 times larger than Arizona (let me check the math on that statistic).

UPDATE: Oops, what I should have written is that Illinois has 12.8 million people and Arizona has 6.3 million, making Barack Obama roughly twice as competent as John Sidney McCain.

The point being, these rationals for comparison are absolutely worthless and serve to dumb down the conversation. Way to go, NRO!

Here's the image of the NRO page, with a surprise irony throw in: 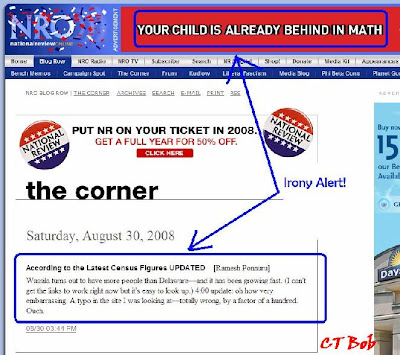