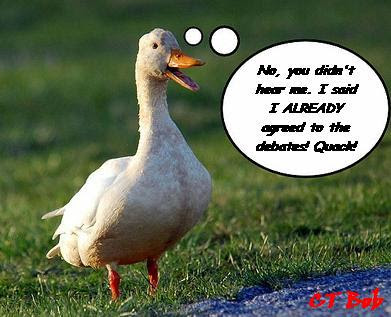 In an entirely predictable development, the Chris Shays campaign issued a testy press release rebutting the claim by Jim Himes that Shays is "ducking" a debate with him.

From the Shays press release:

In contrast to inaccurate statements by the Himes campaign, Congressman Christopher Shays’ Campaign Manager Michael Sohn today released the list of 10 debates to which Shays has already agreed this fall.

Well, sure. Why not?

Funny how Shays supposedly agreed to all those debates, and yet none of the hosts have begun to organize the events. If THEY knew about Shays agreeing, how come they didn't set up dates, times, and locations? Something is a bit fishy.

What I think may have happened here is that the Shays campaign was hoping to string Himes along until it was too late to organize the debates, and THEN respond to the request. That way, he'll look like he tried to set up the debate, but ran out of time. The Himes campaign's press release forced them to act as if they were planning to debate all along.

Does anybody remember a press conference where Shays refused to take questions from a blogger (I think it was Matt W).

At least he let the blogger into the room. Maybe he's improve.

I'm pretty sure it was Shays.

It was definitely Shays and MattW.

And I was in one of Shays's open "town hall" meetings when he accused me and CT Blogger of being hired by Himes to try to catch him in a slip up. I guess if you don't support Shays, you're a plant and a spy.

Funny thing is, Shays then sent campaign workers to track and videotape Himes in his public meetings. I guess he thinks that if he does it, it's OK.