"His name is Henry Paulson." 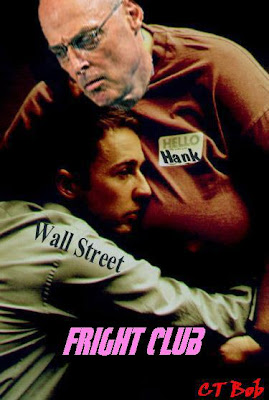 Oh, and don't even attempt to watch what they do with the money, or else that doom might still come a-knockin'.

"It's only after we've lost everything that we're free to do anything."
It took us nearly a decade to get into this crisis. We aren't going to solve it overnight by burying it in tax dollars. Congress needs to take a little time to plan a reasonable solution. But Paulson and Federal Reserve Chairman Ben Bernanke said Congress needs to act swiftly to preserve the health of the U.S. economy and stem a widening crisis that started with housing and has spread to other areas.

"With a gun barrel between your teeth, you speak only in vowels."
Fortunately, there are some legislators who won't allow themselves to be held hostage. Like Senator Dodd.

"There is no second act to this," Dodd said. "It is critically important that we get this right."

The Bush administration is (naturally) asking for a "blank check." On Tuesday, Paulson and Bernanke argued that too many restrictions on the program would limit its effectiveness at a critical time.

"I am Jack's complete lack of surprise."
Additional hearings are scheduled for today. We'll be watching this closely.