Hold everything; time for a photo op! 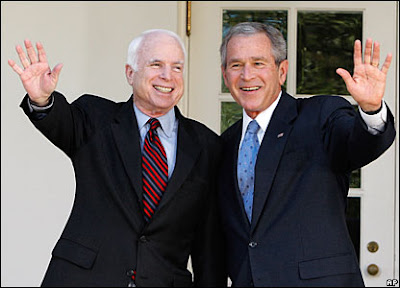 Early today, Rep. Barney Frank (D-MA) said that a deal for the massive bailout is almost complete. But that hasn't stopped John Sidney McCain from trying to insert himself into the crisis in a vain attempt to steal credit for the deal.

"All of sudden, now that we are on the verge of making a deal, John McCain here drops himself in to help us make a deal," Frank said.

He expressed fear that McCain, a U.S. senator from Arizona who has spent much of the year away from the Capitol campaigning, could end up slowing down work on the bill.

The Massachusetts Democrat noted that a meeting on Capitol Hill on Thursday will be interrupted for a "photo op" at the White House with congressional Democrats and Republicans as well as Bush.

And, accurately describing what may at the very heart of McCain's sudden and inexplicable interference in the negotiations, Frank said,

"We're trying to rescue the economy, not the McCain campaign."

Now that a deal is basically complete, we have George Bush scheduling a White House meeting with McCain, Barack Obama, and leading members of Congress this morning. While the legislators should be hammering out the final details of the deal, instead they have to table their work to show up for the GOP orchestrated photo op.

This has all the makings of carefully constructed GOP political theater. You have to give them credit for transforming a bipartisan economic crisis into a partisan political opportunity. Now that the bulk of the work is complete, the Republicans get to praise McCain for his immediate and utterly useless interference in the matter as if it made a difference.

If only the Bush administration had used the same amount of ingenious effort in leading the nation, I can only imagine how different things might be today!

In the long run, this will be as useful to McCain as Palin has been, but probably even less so. It will be difficult for him to turn around those diving poll numbers, and that's what they are aiming at here.

Richard Nixon -- of all people -- coined the phrase "Seagull Operation". A person does a Seagull Operation when he/she swoops in on an ongoing process, makes a lot of noise, shits on everyone and everything, then swoops out again.

"This, my friends, is John McCain's Seagull Operation."

VB - yeah, it's a desperate play that's likely to hurt them more than help.

For economic advice, McCain listens to Phil Gramm. That, alone, should disqualify him from public office.

Well, apparently Wall Street is a bunch of whiners who are having a mental recession.