Bush thanks Chris Shays for "sticking" with him 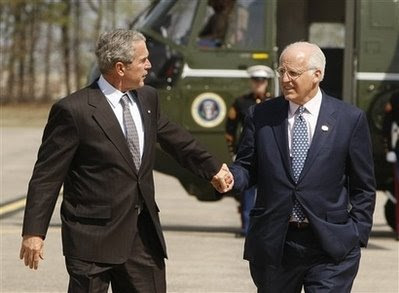 In a White House visit yesterday with a group of Sikorsky workers, President Bush used the opportunity to thank Congressman Chris Shays for his steadfast support.

During the meeting with the workers, who started a group that has dedicated itself to always remembering the brave members of the military services from Connecticut who have died, President Bush said the following to Chris Shays (from the CT POST):

Inside the Oval Office, the group shook hands with the president, who was standing with Shays.

"He talked about the rug pattern he picked out and his desk. And, he thanked Congressman Shays for sticking with him through the darkest days," (Sikorsky worker) Mastroni said.

From George's lips to God's ear!

For all his efforts to distance himself from President Bush, it's very clear that Chris Shays has been and continues to be firmly in the president's pocket. 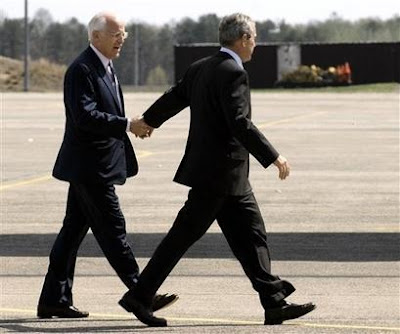 It is much too late for Shays to pretend to stand up to George Bush. Ever since Bush took office, Chris Shays has been (in the words of Nancy Pelosi speaking in Stamford last week):

"Chris Shays is an enabler for President Bush, to have his way with the Congress. His complicity in their agenda has been harmful to this district, to this state, and to this country."

It's very simple. If you want to bring change to Congress and put an end to the failed policies of George Bush, then elect Jim Himes to Congress.
Posted by CT Bob at 9/17/2008 07:30:00 PM

The real caption for those pictures?

"You are never too old to fall in love all over again..."