A very near miss 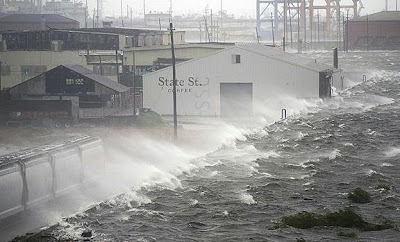 It's probably too early to begin celebrating, but I think that New Orleans dodged a Katrina-sized bullet by mere miles.

Gustav's path veered slightly to the west in the final hours before landfall, likely sparing New Orleans from a repeat of that tragic storm from exactly three years ago.

The preparations for this storm were much more organized than last time. FEMA did a much better job at coordinating evacuations, setting up shelters, stocking emergency supplies, and getting enough first responders in the area to handle the situation.

Additionally, the Army Corps of Engineers have replaced and strengthened many of the levees, but there are still a lot that need to be upgraded. The photo above shows the waters rising just to the top of a levee. If the storm made a direct hit on New Orleans, or there was another two feet of flood waters, who knows what may have happened.

I'm cautiously relieved for the people of New Orleans. There's still a lot that can happen. The storm is still very dangerous and is dumping a lot of rain on Louisiana that will have to flow down the Mississippi, but of all the things that could have already happened today, this is probably the best possible result.

And I say thank god, because New Orleans is too awesome a city to see it die twice in three years. Don't break out the Moet just yet, but it might be a good idea to put it in the fridge for tomorrow.
Posted by CT Bob at 9/01/2008 08:21:00 PM

Remember that Katrina hit on Sunday, and the levees failed after it left.

We're not out of the woods yet.