At yesterday's Obama kickoff rally I ran into two good friends who were wearing their Obama shirts. Dave and Patrizia are very enthusiastic supporters of Barack Obama; I've seen them at several other events, notably the huge Civic (XL) Center Rally in Hartford right before Obama won the Connecticut primary. 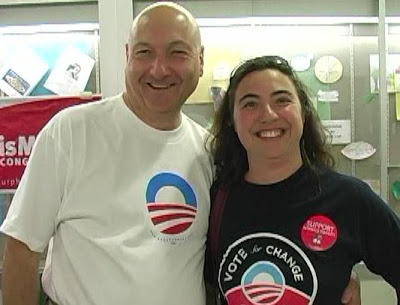 One of the interesting things about these two is the fact that they're both naturalized U.S. citizens. Dave is some kind of U.K. person (I think Welsh maybe?); and Patrizia (who has the throatiest voice I've ever heard on a girl; start with Natasha from "Bullwinkle" and then go a half-octave lower) is from Tuscany or somewhere thereabouts in Italy. I don't remember for sure, I just like the sound of "Tuscany".

I'm obviously not a real stickler for details or I'd be more specific about their places of origin. But what matters is how these newer voters, who made a conscious decision and put in the required effort to become citizens of the U.S., are supporting the candidate who promises change in the way things are going in America.

I think that naturalized U.S. citizens often display a higher level of outwardly true patriotism than many native-born Americans do. Not the "rah-rah" flag-waving stuff, but true concern for the path our nation is taking. Possibly that's because many times they've come here from other nations with limited economic opportunities, social injustices, or lack of religious freedoms, and they now thrive in the freedoms and opportunities that our nation offers.

Which is why, I think, they tend to want to be involved by volunteering when they see our leaders failing us. They truly believe in the promise and potential of America, and to see it squandered or misused through partisan chicanery, avarice, or simply incompetence is particularly galling. They've had to study American history and our most sacred national documents to become citizens, and that gives them a more personal perspective on the importance of our freedoms and protections than many of us, who (and let's face it, it's probably been years since we covered this stuff in school) might have trouble listing more than two or three amendments in the Bill of Rights. It only makes sense that they support a candidate who's actually studied the Constitution and obviously understands the importance of it.

So it's refreshing to see citizens like Dave and Patrizia taking an active role in helping return our land to a nation of laws, protected and enhanced by the freedoms in the U.S. Constitution.

How is it I missed you there? I looked for somebody who looked like your icon...but the closest I got was this moose from Alaska.

Got a tonne more on Mark Chryson from people at dKos. At MLN greanpeas offered some awesome comments, as well. ABC used him as a source when he is as crazy a right wingnut you will ever see. You wouldn't believe some of the stuff we had to wade through.

Bob - I was in the auditorium for all the speeches and hightailed it as soon as they ended. I could have stuck around to talk to some of the politicians, but I wanted to beat the traffic out of there. I only did a few quick passes in the hallway and cafeteria.

CM1 - is that a metric "tonne"? Hmmmmmmmmm? Are we dealing with a Canadian here? LOL! I'll go over and read your latest.

And here I am thinkin ya was that refugee moose fm Alaska...

Here's the simple link for it.
(A little HTML goes a long way!)

Too funny... Did my mixed up French confuse you? What'd ya expect... I lived there long enough, eh?

FYI: Tonne predates the switch to the metric system.

"FYI: Tonne predates the switch to the metric system."

Yeah, I figured there was something "Canuck-ish" about you.

I guess it could have been worse. At least you're not a Newfie!

(Oh Jesus! I hope that's not the Canadian equivalent of the "n-word"!)

Please Bob can you let the Himes Campaign know that they need to work harder in bridgeport puting up yard signs around bpt.i can go another 2 years with shays and Himes is our only hope

first time on your blog, it's nice!
we were talking about the Obama campaign and we both agreed that we're surprised how much we've come to love & care about this great country since we came here from Italy and the UK.

Keep up the good work!

Good to see you here Dave & Patrizia! I hope you liked my little article about you. You're internet stars now!

And regarding Himes and lawn signs; I'm sure the campaign is working very hard to get the word out about Jim. We'll see an explosion of signs over the next week or so, I'm sure.

"(Oh Jesus! I hope that's not the Canadian equivalent of the "n-word"!)"

It kind of is. Some don't mind it as long as it isn't used in a negative way, others don't like it at all.

ok because i was like nobody really knows about him. Im just hoping on election day that Bridgeport residents come out in large numbers and vote himes. i really dont like Shays

(...and besides, they're only Canadians...it's not like they even HAVE the internet up there!)