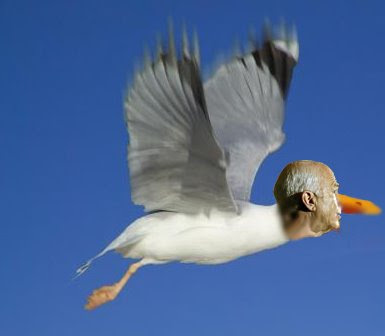 (image and article concept by Bob Symmes)
I've always had a bit of grudging admiration for Richard M. Nixon, who despite his many character flaws, was a very perceptive guy. This fact becomes most apparent when you listen to him talk, either on his "self-bugged" White House tapes, or in interviews many years after he left the Oval Office in ignominy.

During once such occurrence, Nixon complained about someone's interference in the Vietnam-era Paris Peace Talks. He referred to the unnecessary intrusion as a "seagull mission".

In plain terms, or as John Sidney McCain might say, "straight talk", a seagull mission is when somebody swoops in on an ongoing process, makes a lot of noise, shits on everyone and everything, then swoops out again. This is absolutely what McCain did with the delicate economic negotiations yesterday. Before he came in and messed everything up, both parties had a tentative agreement in place. Afterward, the Republicans changed their proposal, added a bunch of ridiculous demands, and then absolutely refused to negotiate further.

I couldn't find the exact quote Nixon used, but here's an example of a "seagull mission" is available from an online document about a Canadian hearing (Pg. 5 Col. 1):

Years ago I did a fair amount of work on security services, and especially on their accountability. One of the terms used in security services is a seagull mission, where a spy or an agent flies into an area, makes a mess all over the place, then flies out again. I have a sense that quite often deputy ministers are on seagull missions in departments. They fly in, make a mess of things, and then fly out after a year.

According to Drudge only 4 House Republicans supported the plan as of Thursday morning. Pelosi has said she won't make her caucus vote without 80 to 100 votes from the Republicans in support - so it's far from clear that the plan was on track until McCain 'swooped in.'

Several commenters, including Paul Krugman of NYT, had warned last week that this whole process was a set-up.
The current situation is as predicted: the Democrats are seen as lined up with Bush wanting to throw money at Wall Street and the suddenly noble, populist Republicans are taking a stand to protect the honest taxpaying Americans. This current stand-off WAS THEIR PLAN.
These maverick Republicans, including McC, can now run against both Bush and Obama. Such a deal!
oldswede

Apparently the old man discovered that his game wasn't working: the press, most of Congress, many of the folks calling in to C-Span didn't buy it. So John McCain is getting on a plane for Oxford, Mississippi and the debate is on... and without a closed deal on the Hill which he said was his requirement.

This really makes it clear that he was playing a little game with us! Oooooh, that McCain. Such a kidder!

We were had. The Republicans lined up and stopped this very unpopular bailout and the House Dems caved to the most unpopular President in history. I was ashamed to be a Democrat yesterday. Thanks for nothing Rosa!